Is Zimbabwe set for a Mugabe dynasty with Grace as VP? 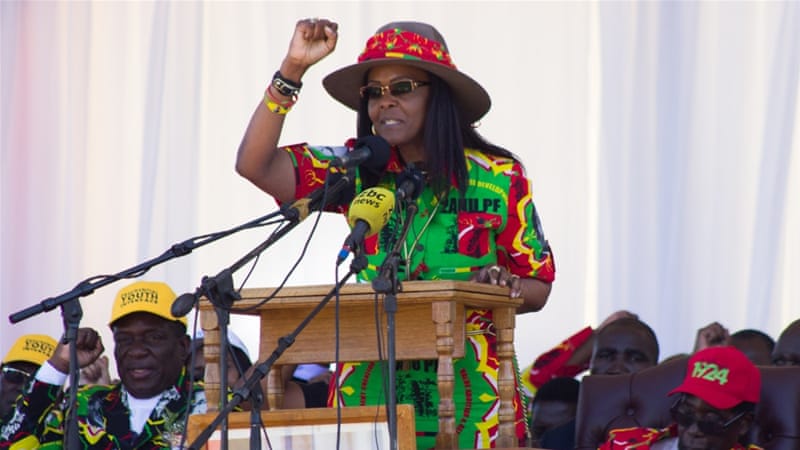 With parades and a party endorsements for the first lady after Mnangagwa was sacked, analysts say a new path is clear.

All the party’s provinces have rallied around the 52-year-old for the vice presidency, with her strongest support coming from the Zanu PF women’s league, which she leads, and the youth league.

Youth league leader, Kudzanai Chipanga, who organised a solidarity march in her honour on Wednesday, said she was the only person fit to take up the post.

“As youth, we don’t believe in patriarchy; women can also be leaders. We want [Grace] Mugabe as our vice president because she can work well with the president and she can help him in leading the nation,” he said.

The solidarity gathering was held to apologise to the first lady for being heckled by a small group of pro-Mnangagwa party youths in the second city of Bulawayo last weekend.

The overwhelming support for Grace comes ahead of an extraordinary Zanu-PF congress to be held in the capital, Harare.

That gathering next month is set to endorse President Robert Mugabe as the party’s one centre of power and sole presidential candidate for 2018’s elections.

From typist to aspiring president

Grace herself has not ruled out the possibility of becoming vice president, nor has she rejected claims that she aspires to succeed her husband.

“My husband is the president, and I’m the president’s wife. I’m a woman, so why can’t I be the vice president? Am I not a child of Zimbabwe?” she said to crowds at a rally in the second city of Bulawayo at the weekend.

During the first years of their marriage in 1996, Grace had little involvement in political affairs and mainly focused on managing the family’s vast business and real estate interests in Zimbabwe and beyond.

Since her controversial attainment of a PhD in Sociology in 2014 – she was hastily awarded a doctorate from the University of Zimbabwe – and her election as first secretary of the Zanu PF women’s league, she has become more involved in party politics.

In late 2014, Grace held a series of rallies accusing the then vice president, Joice Mujuru, of conspiring to topple Mugabe.

Mounting allegations of corruption and attempting to assassinate the president resulted in Mujuru’s dismissal and expulsion from the party.

Now for the second time in less than five years, Mugabe has fired another deputy accused by Grace of plotting to succeed the world’s oldest sitting president.

The power behind the throne

As Zanu PF’s December congress is a special elective conference, some analysts predict Grace could be elected into the party’s four-member executive as the party constitution requires the praesidium to consist of at least one female member.

Since Mnangagwa’s expulsion, Zanu PF’s praesidium currently consists of Mugabe – who is the first secretary, Ignatius Chombo, the national administrator and Phelekezela Mphoko, who currently serves as the deputy second secretary and national vice president.

McDonald Lewanika, a political analyst and activist, told Al Jazeera Grace’s election to the praesidium was a strong possibility that could lead to her succeeding her husband.

“Her power belies in the fact that her husband is the president, but we are yet to see what happens if Robert Mugabe isn’t there for her. She is angling for the vice presidency right now, but she also seems intent on keeping the presidency in the Mugabe household.

“For now the choreographed endorsements we have seen from the provinces may be all the Mugabes need to convince themselves that what they are doing is legitimate and they have the will of the people,” he said.

While most observers agree with Lewanika’s view, one analyst holds a different perspective.

Ibbo Mandaza, director of the SAPES Trust, a regional think-tank, told Al Jazeera he believes Grace does not want the presidency, but to secure her future after Mugabe.

“She wants to ensure her future and the security of her family so she might prefer someone who can look after her interests to succeed Mugabe,” he said in a telephone interview.

‘Not what we fought for’

Victor Matemadanda, secretary-general of the Zimbabwe National War Veterans Association, told Al Jazeera the ongoing expulsions were a strong indication that Mugabe was acting in his own interests and those of his wife.

“Mugabe is no longer doing the things we thought he would do after the war. It’s like he wants to rule the country with his wife, but we can’t allow that, that’s not what we fought for and that’s not the Zanu PF we belong to,” he said.

The war veterans recently declared they had formed a revolutionary council to challenge Mugabe’s grip on the party.

Matemadanda is currently facing charges of insulting the president for wearing a t-shirt printed, “Control your children first” and “Grace: a failed mum, her sons unruly rogues. Failing with only two boys, can’t mother 14 million.”

The t-shirt refers to the extravagant lifestyle of her two sons, Robert Jnr, 25 and Bellarmine Chatunga, 21, whose partying led to an incident in which Grace allegedlyassaulted a South African model with an electric extension cord after finding her in a hotel room with her sons.

The Zimbabwean first lady was later granted diplomatic immunity, an order the alleged victim is currently challenging in court.

But in spite of controversy, party members have remained steadfast in their support of the first lady and countered the charges through loyalty marches.

With the chant “munhu wese kuna Amai” (everyone to the mother) rising louder and louder as more voices back the call for a female vice president, Grace, the mother of four, could one day become the mother leading the nation.