‘Isolated Mugabe had no choice’ – analyst 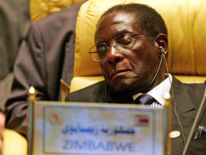 A politically isolated President Robert Mugabe would have had no choice but to resign after thousands of Zimbabweans took to the streets on Tuesday to call for his resignation.

Prof Brian Raftopoulos, leading South African researcher on Zimbabwe from the Solidarity Peace Trust, said Mugabe’s decision to step down may have been the result of a SADC meeting that took place earlier on Tuesday.

“We can only speculate why he would resign now and not yesterday when he delivered his address to the nation and everyone expected him to,” he said.

“One reason may be that he got some additional messaging from the meeting with SADC leaders earlier today, where they may have told him that if he didn’t go now he’d be isolated in the region.

“He already knew that he was isolated. He had lost the army, was kicked out of the party leadership, saw a mass display of disaffection, and pretty much had a strong idea of how isolated he was. One doesn’t know what broke the camel’s back, this may have been one additional motivation.”

The fate of his wife, Grace, would have been top of mind for the dictator during his exit negotiations.

“I think this is a big worry for Mugabe. He’s at a stage of his life where he doesn’t have a lot of time left and he would want to make sure she is OK. She would be petrified of what life would be like without him and if I were her I would look to get out of the country as soon as possible,” says Raftopoulos.

While thousands of Zimbabweans will be celebrating the departure of the dictator, economically and politically Zimbabwe won’t recover overnight from the damage he’s done.

“My worry is that the manner in which the transition was done has set a terrible precedent of the military being arbiters of the political process. Any possible opposition outside of Zanu-PF is going to face major challenges. The party made it very clear that they’re still in charge and that their man is taking over and this just sets a terrible precedent for the future.

“The immediate challenge is the economy – Mnangagwa will want to get away of how the transition happened as soon as he can to focus on issues of the economy and establish new economic relations,” says Raftopoulos.