It is time to Panic a little

I think it was 1992, the season started badly and as it progressed the heat increased until we were experiencing temperatures over 50 degrees Celsius in the lowveld.

Source: It is time to Panic a little – The Zimbabwean 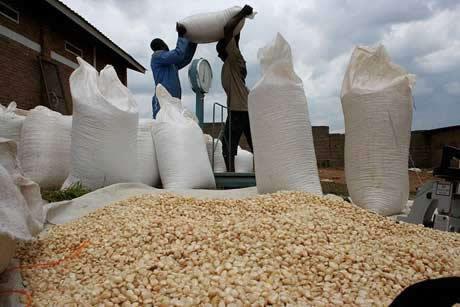 We had a business there and my son was down there living and working. It got so hot that we closed the office at 10 and came back to work when it cooled off a bit. Birds were dying in the trees and falling to the ground. The Ministry of Education closed the schools.

As the season progressed the rains simply did not come in the south. We were shareholders in an 80 000-acre ranch and by the end of summer we were down to 15 cows and a bull – all on feed. The sugarcane on the Triangle and Hippo Estates died, the great rivers of the Lowveld dried up and the Hippo died with them. Farmers to the north where they had some grass and crop residues sent them down the lowveld to keep some animals alive. A small number of Hippos were captured and put into small dams for the winter. The only green thing for hundreds of kilometers was the Triangle golf greens – what water the Estate had kept them green – good priorities!

I do not think we had a blade of grass within a 200 kilometer radius of our Ranch.

The hero of that situation was an elderly friend of mine who was the Chairman of the Grain Marketing Board. He sensed that this season was going to be different and he acted earlier than anyone else by ordering maize grain from overseas markets in hundreds of thousands of tonnes on an emergency basis. Trainloads of grain arrived and was taken into storage because he recognized that we would have to feed the country and running out of maize was simply out of the question.

The GMB is not what it was in those days – a well-run organisation with a clean audit record and a reputation for managing stocks that was unparalleled in Africa. The Railways are no longer what they were, capable of running a 100 trains a day and hauling 20 million tonnes of cargo at a cost that was half the cost of road haulage.

We have just had a disaster of a season – the Official estimate of what maize will be delivered is 350 000 tonnes – 20 per cent of demand. The Official figure for maize in stock is 430 000 tonnes. Not too bad you say. But a snap audit by the Army has revealed that actual stocks are not even half of this quantity and then much of it (most?) is unfit for human consumption. We could be down to six weeks supply for a basic staple that is eaten every day by almost every Zimbabwean. Only 28 000 tonnes has been delivered so far to the GMB. What has gone wrong?

First, corruption. With the GMB buying maize at $390 a tonne and selling it for $240 a tonne, the temptation to buy a miller’s license and drive up to a depot and buy 30 tonnes of maize for $7 200 and then buy a farmer’s license and drive to another depot and sell it for $11 700 and make a cool $4 500 on every turn, was too much. This activity inflated deliveries and cost the Treasury hundreds of millions of dollars. Then they took in maize that had a very high moisture content – the GMB buys by weight. The excess moisture in the grain led to fermentation and heating and we are left with expensive compost, much of it not even fit for stock feed. To compound the problems maize was stored in concrete silos that had not been properly maintained and pest control systems did not work.

It is a complete mess. But the worst part is that, unlike 1992, my friend is now long dead and those who followed him had no foresight – all they wanted to do was to maintain the fiction that the stocks were there and were in good condition. The Minister has changed the Board and its first meeting was a few days ago and in a few minutes it was apparent that all was not well.

The problem is that we have no financial reserves, the GMB has a lousy reputation for payments and is no longer trusted by grain traders and even if they were, our Railways can barely move 8 trains a day and 3,6 million tonnes of cargo a year and then at a cost that is actually above that of road transport. Lead time on new stocks from overseas is at least 3 months after we have paid.

We are in the proverbial dwang.

Do we have to panic, sure, if we do nothing? This situation calls for swift and decisive action. We first need to understand the extent of our problem – audit the stocks immediately and make the results known to decision makers. But even while we wait for this we need to get maize moving. My solution would be to talk to South Africa and have them release stocks to us from the Transvaal so that our transport distances are not too far. They would then replace the stocks by sea from abroad.

Then we need to persuade a trader, to pay for and supply such maize and start moving it up to Zimbabwe and to hold such stocks in bond with private sector players in the industry. We need stocks in every major center. With luck we can then see fresh supplies coming in and being available to millers and packers.

Once this stage is accomplished we need to make it possible for buyers in Zimbabwe to secure their hard currency needs at a real market price from the bank intermarket. This is not possible at present because, 5 months after the bank intermarket was agreed and announced it still does not exist. In addition, no real market price is available as we are still all trading foreign currency in our different individual silos and a market price based on the willing seller/willing buyer simply remains unknown. Importers cannot get their needs because the Reserve Bank has now, for three full weeks, refused to release hard currency onto the market – which it has not created.

If this situation persists, even for a few weeks, imports would have to be paid for in hard currency purchased at a massive premium. If such stocks were sold at the resulting market prices we would have to increase maize meal prices three fold – a sure receipt for riots. The Economic Round Table has been calling for action n in this respect for nearly a year, with no progress, perhaps, just perhaps, we have to have a real crisis to get action.

Let me repeat – our macro-economic fundamentals are sound. We have a balance of payments surplus.  There is no reason – mathematically or from a market perspective as to why we are paying 10 to 1 for US dollars. In a real market, operating on a transparent basis and with all foreign earnings going onto the market when they hit the banks, our exchange rate would be 3 or 4 to 1. If that was the case, then when our millers bought stocks from the traders in hard currencies, they would actually be able to reduce the current market price.

Work it out for yourself – today a 2 KG pack of maize meal costs about R$3000 a tonne. Maize imports will cost us about US$340 a tonne. At 4 to 1 it would sell at R$1360 a tonne – they could reduce maize meal prices by a third. It’s not complex, just plain common sense.

Of course we have to solve a myriad of other problems such as what to pay the farmers, how to finance the next crop, long term how to give our farmers security of tenure and get our costs of production down. But right now we need to panic a bit and make sure that what needs to be done is done and that we can provide all basis staples (maize is not the only problem) to our people at an affordable price. Perhaps then one remaining priority – let’s put all those who got us into this mess in jail with hard labor on a prison farms.