President Mnangagwa meets his Rwandan counterpart President Paul Kagame on the sidelines of the Tokyo International Conference on African Development in Tokyo, Japan, on Thursday. — (Pictures by Joseph Nyadzayo)

From Kuda Bwititi in YOKOHAMA, Japan
A Japan-based company, Afro-Japanese Business Consultants, yesterday signed a Memorandum of Understanding with the Government as it expressed its intention to invest in six major projects. The company seeks to invest in the health sector, transport, road marking, solar power plant, production of industrial cannabis and setting up an investment fund for Zimbabwe.

Afro-Japan Business Consultants was one of the numerous companies that expressed interest to invest in Zimbabwe after its officials met President Mnangagwa at the Tokyo International Conference (TICAD) summit in Yokohama.

President Mnangagwa oversaw the signing of the MoU by Finance and Economic Development Minister Professor Mthuli Ncube on behalf of Government as well as Mr Ryoichi Goto, who represented Afro-Japanese Business Consultants.

Speaking to journalists after the signing ceremony, President Mnangagwa welcomed the company’s intentions to invest in Zimbabwe. 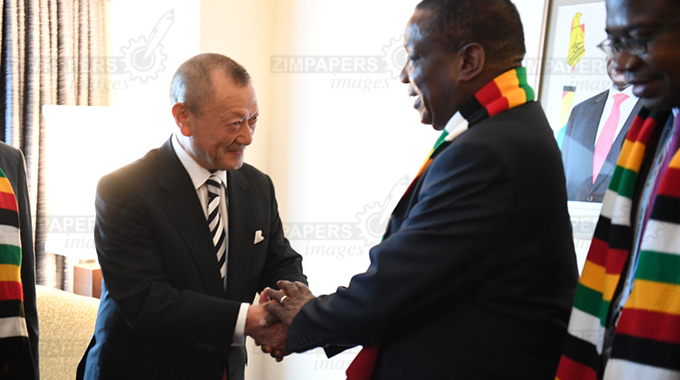 President Mnangagwa welcomes Mr Tetsuro Yano, one of the Japanese investors who expressed interest to invest in Zimbabwe.

“You are most welcome and I am happy that you want to cooperate with Zimbabwe; I am happy with the offer that you have made to set up a consulate establishment here in one of the cities in Japan because that will facilitate a lot of people to come and invest in Zimbabwe,” said President Mnangagwa.

“We will be able to reach many people that way. The other projects you have mentioned are also very important and most welcome, like the venture capital, are most ideal.

“We are an economy in transition and we need such support because then, it facilitates us in assessing global capital for our own economic growth.”

President Mnangagwa promised to closely follow-up on the deals through his Cabinet ministers.

“The ball will be in your court. Every time you come to Zimbabwe I will make sure that I kick it back through our ministers,” he said.

Since the coming in of the Second Republic, investors are stampeding for local opportunities, especially in the mining, manufacturing and energy sectors, following the creation of a conducive investment climate that creates a win-win situation for both the country and the investor.

Already, many companies are either working on huge solar projects or have applied for licences. The mining sector has also seen firms such as Karo Resources coming in.