A ZIMBABWEAN journalist has been left hospitalised after he was assaulted by Zimbabwe Republic Police (ZRP) members on Tuesday 12 December 2018 while carrying out his professional duties. 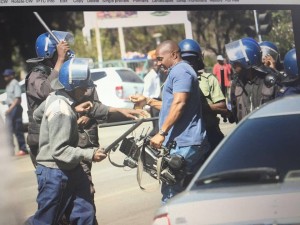 ZRP members assaulted Panashe Makufa of Mail & Telegraph, an online newspaper, after arresting and
detaining him together with Hubert Sithole aged 27 years as they conducted their professional duties in
the capital city.

Makufa aged 22 years sustained injuries on his body after he was assaulted by the truncheon-wielding
police officers.

The journalists, who were detained at Harare Central Police Station for two hours, were released following the intervention of Kudzayi Kadzere of Zimbabwe Lawyers for Human Rights, who offered emergency legal support services to the media practitioners.

The duo was released without charge but the ZRP members confiscated and smashed their camera and
Kadzere is making frantic efforts to retrieve it.