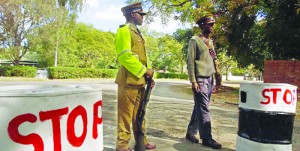 Other than putting President Robert Mugabe and his motor mouth wife, Grace, in a corner, the army’s shock takeover of government last week is being praised for putting a stop to police roadblocks.

The Zimbabwe Republic Police (ZRP) is now one of the most reviled institutions because of the countless roadblocks where traffic cops harass motorists and demand bribes.

After the army took over the government in the early hours of Wednesday morning, roadblocks disappeared and sanity returned on the roads.

Rainer Manetsi, a commuter omnibus driver in Harare, said police roadblocks had become a serious threat to their jobs as most of their income was being channelled to bribes.

“It has been a few days of ‘happy hours’ on repeat. No more roadblocks and paying ‘toll fees’ to these Mugabe thugs,” said Manetsi who plies the Mabelreign/Westgate route.

“Every day we would pay $5 as toll fee and if you were unlucky to meet a different team they would make you pay again,” he added.

“On a good day and during peak hours I can even make extra for myself.”

“There was always a police roadblock just after the bridge along Seke road. We had no choice but to pay since that is the only way into town,” he said.

“But since the soldiers took control, we have not seen one single roadblock and it has made our job easier.”

There had been several complaints from members of the public concerning the many roadblocks, especially on the highways.

A two-hour journey would take longer because of the roadblocks.

A couple that travelled from Binga to Harare on Friday said they did not encounter a single police roadblock.

“All the way from Binga we did not encounter any hassles. We were only stopped briefly at a (Zimbabwe National Army) ZNA-manned roadblock but it took us a few minutes,” said the woman who did not want to be identified.