Expecting mothers in Mt Darwin got more than they had hoped for on Wednesday when they received preparation kits from First Lady Amai Auxillia Mnangagwa.

The First Lady brought food hampers for the elderly and vulnerable in Tsakare area in addition to preparation for 100 pregnant women.

Excited beneficiaries thanked the First Lady for the food hampers saying it was an early Christmas gift.

In an engagement session, the First Lady expressed concern over the high rate of child marriages in Mashonaland Central.

The elderly residents of the area opined that lack of indigenous fruits had led to consumption of exotic fruits by the young generation which was causing them to grow fast and become sexually active at a young age. 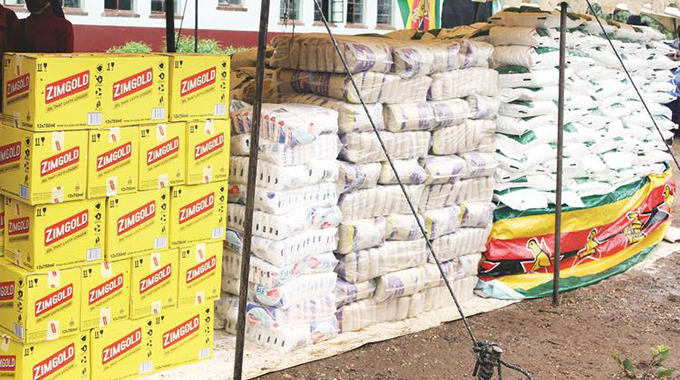 They said indigenous fruits slowed down adolescence and it was of paramount importance to protect indigenous trees.

The community also said children were being married off for free and blamed the problem on increasing artisanal miners in the area who were luring them with money.

Access to technology and mobile phones had spurred youths to be mischievous.

The donations and the engagement came after an event at Tabex Secondary School in Mt Darwin South, to commemorate the National Tree Planting Day during which Amai Mnangagwa planted baobab trees.

The First Lady, who is Patron of the Environment, urged traditional and political leaders to take the lead in tree planting to mitigate climate change effects and ensure food security as the country gears towards achieving an upper middle income economy by 2030.

Amai Mnangagwa urged people in Mashonaland Central to protect indigenous trees which are important in preserving our culture heritage. “This year we are planting the baobab tree which is loved for its fruits, tree bark and is an attraction to tourists because of its big size. The seeds are used to make coffee, oil, medicine and other beauty products,” she said.

“Some families are making a living out of selling wild fruits among other things. As Patron of the Environment, I pledge to support planting of trees to raise awareness on the importance of protecting forests countrywide.

Climate change had resulted in high temperatures and caused global warming in some areas, becoming a threat to human life.

The First Lady said there was need to adopt mitigatory measures like planting of trees and protecting forests in the wake of deforestation in some areas. She commended the Ministry of Environment, Climate, Tourism and Hospitality Industry for working closely with the Forestry Commission and other partners in afforestation efforts.