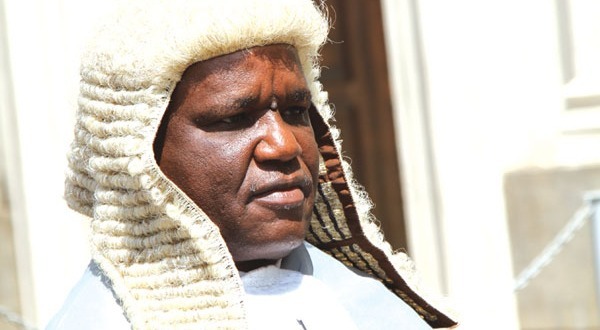 HIGH Court judges have come out against Chief Justice Luke Malaba for directing them to present their judgments to the Judge President or himself before delivering them, saying his actions were meant to curtail the independence of the Judiciary and directly influence the justice delivery system in the country.

But in a memo to Judge President Justice George Chiweshe dated July 22, the judges said the chief justice’s directive was highly objectionable and asked him to revoke it.
They also argued that it was impractical that the head of court or the heads of divisions would “see” every judgment or order before it is handed down.

“Judges of the High Court, at all the stations, wish to bring it to the attention of the Hon Chief Justice that, paragraph2 (iv) and (v) of the directive, even as amended, is highly objectionable and completely unacceptable for a number of reasons, not least: by some administrative

fiat, it is effectively sought to impugn and seriously undermine the independence of a judge who, in terms of the Constitution, is appointed as an individual to exercise, without fear or favour, such of the functions as are reposed by law,” the judges said.

They said Justice Malaba had misdirected himself in trying to bring judges under the control and direction of other judges, affecting their independence.

“In the exercise of his or her judicial functions, such as making decisions and handing them down, a judge does not operate under any other judge or person or body. The directive to have the head of court or division ‘see’ a judgment or order before they are handed down lacks precision as to what this means practically, and what the ‘seer’ ought to do after ‘seeing’,” they wrote.

Justice Malaba has tried to tone down his directive after facing fire from international judges and lawyers.

The local judges questioned the directive to have the head of court or division “see” a judgment or order before it is handed down which they said lacked precision as to what that meant practically, and what the “seer” ought to do after “seeing”.

“Contrary to the position as stated in Paragraph 2(v) that only the Constitutional Court and the Supreme Court have final jurisdiction, the High Court is itself a superior court with original jurisdiction in all matters except those limited or removed by law; it has final jurisdiction and its judgments are binding throughout the land unless if set aside on appeal,” they said.

“It is an age-old practice that has stood the test of time that in suitable cases, a judge of the High Court can issue orders which the parties who appear before him or her can fully act upon in the meantime as he or she prepares the reasons for his or her decision, if they are required, or if an appeal is intended or has been noted.”

They pointed out that even judicial officers in inferior courts such as magistrates do not have to have their judgments or orders “seen” by someone else before they are delivered.

Justice Malaba’s directive comes at a time civil society and opposition parties have raised concern over what they see as the Judiciary’s failure to maintain its independence, particularly in political disputes.

Newer Post
Eternal mothers, whores or witches: being a woman in politics in Zimbabwe
Older Post
Zimbabwe slated by CITES for live elephant export in contravention of treaty