A ditch right in the middle of Jason Moyo Avenue in Harare’s central business district that has been unattended by council officials for more than a five days has become a danger to motorists and pedestrians.

The ditch is situated near the city’s busiest pedestrian crossing line adjacent to Cabs Building along Jason Moyo Avenue.

During peak hours, motorists are having a hard time to navigate through that section of the road as it means they have to encroach into other lanes. 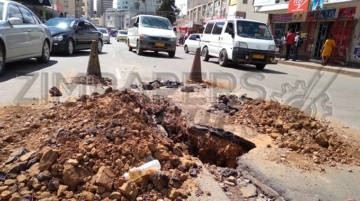 While the council has taken a snail’s pace to attend to the ditch, another major cause for concern is that apart from two poorly visible road cones placed, there no other mandatory precautionary signs including a marking tape showing that there is work in progress.

Harare City Council spokesperson Mr Michael Chideme this afternoon said the ditch would soon be closed as workers were still busy on it.