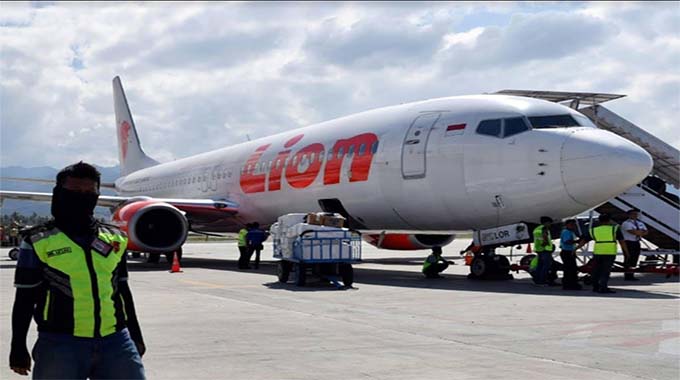 Lion Air, a low-cost Indonesian airline, has been involved in a number of incidents in recent years. – AFP

JARKATA. – A brand new Indonesian Lion Air plane carrying 189 passengers and crew crashed into the sea Monday, officials said, as the carrier acknowledged that the jet had previously been grounded for repairs.

The Boeing-737 MAX, which went into service just months ago, vanished from radar 13 minutes after taking off from Jakarta, plunging into the Java Sea moments after it had asked to be allowed to return to the Indonesian capital.

Websites that display flight data showed the plane speeding up as it suddenly lost altitude in the minutes before it disappeared.

Video footage apparently filmed at the scene of the crash showed a slick of fuel on the surface of the water. Pictures also emerged of debris, including what appeared to be an emergency slide, and bits of wreckage bearing Lion Air’s logo.

The plane had been en route to Pangkal Pinang city, a jumping off point for beach-and-sun seeking tourists on nearby Belitung island, when it dropped out of contact around 6.30 am (2330 GMT).

It was not yet known if there were any foreigners on board.

A search and rescue operation swung into gear, with organisers saying the plane was in water about 30 to 40 metres deep.

Images filmed at Pangkal Pinang’s main airport showed families of passengers crying and hugging each other, with some yelling “Oh god”.

“This morning he called asking about our youngest son,” said a sobbing Ermayati, referring to her 45-year-old husband Muhammed Syafii, who was on board.

The transport ministry had initially said there was a total of 188 people on board.

The finance ministry said around 20 of its employees were on the plane.

“I still hope for a miracle that some passengers are still alive,” said Sendi Arika, whose uncle was on the flight.

Lion Air said the plane had only gone into service in August.

The pilot and co-pilot had more than 11,000 hours of flying time between them, had recent medical checkups and had undergone drug testing, it added.

Lion Air CEO Edward Sirait said the plane had an unspecified technical issue fixed in Bali before it was flown back to Jakarta.

“Engineers in Jakarta received notes and did another repair before it took off” on Monday, Edward Sirait told AFP, calling it “normal procedure”.

US-based Boeing said it was “deeply saddened” by news of the crash. 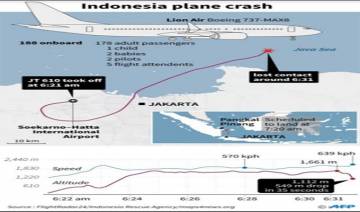 Indonesia relies heavily on air transport to connect its thousands of islands but has a poor aviation safety record and has suffered several fatal crashes in recent years.

In August 2015, a commercial passenger aircraft operated by Indonesian carrier Trigana crashed in Papua due to bad weather, killing all 54 people on board.

In 2014, an AirAsia plane crashed with the loss of 162 lives, with chronically faulty component in a rudder control system, poor maintenance and the pilots’ inadequate response blamed.

Lion, a low-cost airline which has engaged in a huge expansion in recent years, has been involved in a number of incidents including a fatal 2004 crash.

Last year one of its Boeing jets collided with a Wings Air plane as it landed at Kualanamu airport on the island of Sumatra, although no one was injured.

In May 2016, two Lion Air planes collided at Jakarta’s Soekarno-Hatta airport, while a month earlier an aircraft operated by Batik Air — part of the Lion Group — clipped a TransNusa plane.

However, in 2004, two dozen people were killed when a Lion Air flight from Jakarta skidded off a rain-slicked runway after landing in the Central Java city of Solo.

Boeing, just days out from its first commercial delivery of the 737 Max in May last year, reportedly suspended its release due to an engine issue, according to airline safety and product review site airlineratings.com.

It said the engines were a product of a joint venture between US-based General Electric and France’s Safran Aircraft Engines.

Indonesia’s air travel industry is booming, with the number of domestic passengers growing significantly over the past decade, but it has acquired a reputation for poor regulation. – AFP