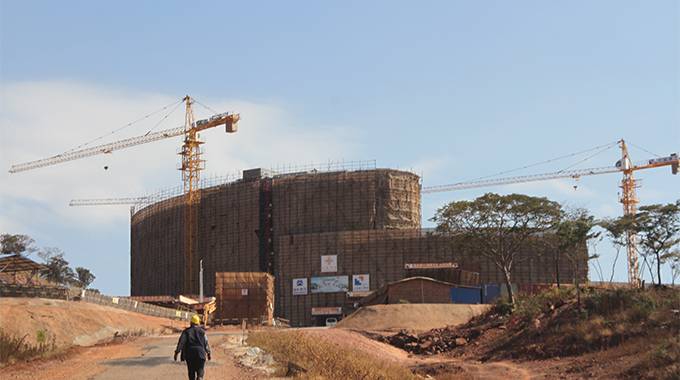 Elliot Ziwira Senior Reporter
Structural works on the imposing six-storey Parliament Building in Mount Hampden sitting on a 70-metre platform above the scenic surrounding area, symbolically projecting legislative supremacy, are 100 per cent complete, save for finishing internal and external undertakings.

Speaking on the side-lines of an Appreciation Tour of the New Parliament Building by Service Chiefs yesterday, Ministry of Local Government and Public Works acting Permanent Secretary Mr Christopher Shumba said: “The final details are with the engineers, but we are happy that we are ahead of schedule. As you can see the tour indicates that we are almost through.

“The opening, however, is going to be delayed a bit because of Covid-19. The number of people working here has also been reduced, so that is our main worry. It becomes a bit difficult for us to give you the actual opening day.”

Engineer Henry Hungwe, who is the acting chief director for Public Works in the Ministry of Local Government and Public Works weighed in:

“No more structural works will be undertaken, therefore, the super-structure is now 100 percent complete. What is only left are internal and external finishing endeavours to enhance the beauty of the structure and make it usable. Such works to do with electricity, water supplies, air conditioning and all that which makes habitation comfortable, are what they are working on now.

On the work currently in progress he revealed that, although “little work” is going on “there are about 80 Chinese workmen who are plastering, doing the wiring for electricity, and some air-conditioning works from the top coming down.”

“Because of Covid-19, we are off-programme by about three months, but we were expecting the building to be done by April 2021. If the number of workmen is increased, they might be able to catch up. Locals are expected to be engaged by the end of this month; and a team that will be bringing in the fittings from China is also expected by then,” he added.

Zimbabwe Republic Police Commissioner-General Godwin Matanga appreciated the progress thus far, adding that they will advance their recommendations in due course.

“One behalf of the Zimbabwe Republic Police, I would like to thank the Minister of Local Government and Public Works for inviting us to see the developments taking place at this New Parliament Building.

“We are going to sit with other stakeholders, and come up with specific recommendations as far as security arrangements for this New Parliament Building are concerned. For now it is very important for us to ensure that we situate our police station inside the building itself, at the convenience of the contractor of course.

“But for now we appreciate it so much. . . I hope we are going to be invited once more to make sure that we make some final checks and recommendations to the building.”