The notes will become the fifth note in circulation

The Reserve Bank of Zimbabwe has announced the introduction of $50 notes that will come into circulation with effect from tomorrow the 7th of July 2021.

The central bank said it shall release $360 million worth of these new notes.

The notes will become the fifth note in circulation although use of the $2 and $5 notes is now limited due to inflation.

In a statement released Tuesday, central bank Governor Dr John Mangudya said the $50 bank note will be “issued on the 6th of July (Tuesday) 2021 through Statutory Instrument 196 of 2021.”

“The Bank shall release $360 million through normal banking channels and banks are expected to fund their respective accounts held at the Reserve Bank and collect the cash from 7 July 2021,” reads part of the statement. 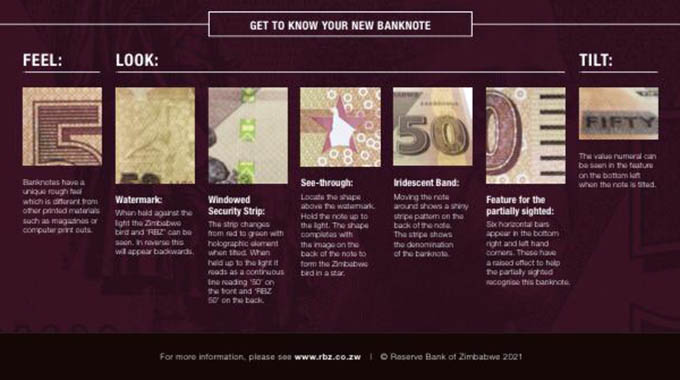 Statutory Instrument 196 of 2021 has since been gazetted and it reads:

“The design of the fifty dollar banknote shall be as follows –

(a) on the front side the dominant feature shall be the logo of the Reserve Bank of Zimbabwe (three balancing rocks), with the visually impaired recognition feature to the left, latent image showing the denomination, windowed security strip inscribed “50” with colour shift from red

The RBZ has accelerated the issuance of notes into the system and as of 25 June 2021, currency issued by the apex bank amounted to $3.88 billion from $2.38 billion at the end of December 2020.

The new notes come at a time inflation has been slowing down although the central bank revised upwards its end of year inflation forecasts to 25 percent from an earlier projection of 10 percent.

Experts say paper currency does not add to Reserve Money as banks are required to buy it from the central bank using their electronic balances. Reserve Money is however at an all-time high of $24.45 billion.