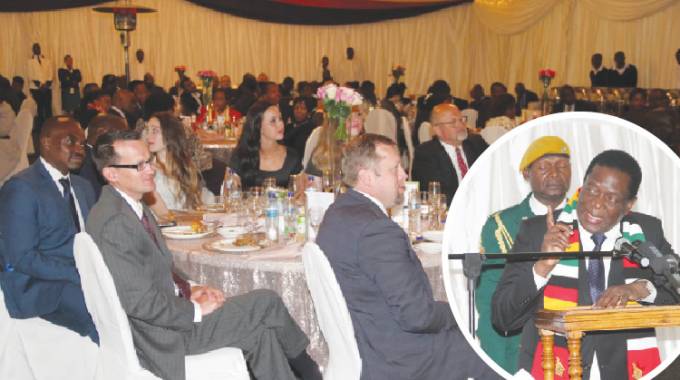 Tendai H. Manzvanzvike
The power of partnering in worthy causes was demonstrated on Wednesday when President Mnangagwa and First Lady Amai Auxillia Mnangagwa hosted a special dinner at State House for American doctors, who spent a week in Kanyemba, Mbire district in Mashonaland Central Province offering free health care services to hundreds of the Doma community.

President Mnangagwa said this was probably the first time that they were giving an official appreciation to people that offer selfless service to the people.

In his welcoming remarks, President Mnangagwa commended the American doctors for reaching out to the Doma people, who are among the most disadvantaged members of society.

“On behalf of the people and Government of Zimbabwe, and indeed on my own behalf, may I take this opportunity to acknowledge the assistance rendered by the visiting medical doctors from the United States of America in the course of accompanying the First Lady Amai Mnangagwa to Kanyemba in Mbire, Mash Central.

“For a week, the team of doctors braved the trying conditions of Kanyemba where they visited villages such as Masoka, Mariga and Chapoto. True to their calling, they rendered vital medical consultations”, said President Mnangagwa.

The President said when he saw what the medical team was doing on television, he felt “very much impressed and appreciative.”

“I wish to underscore that the American doctors, who accompanied the First Lady, offered free diagnosis and medical treatment to the people of Kanyemba – our people. You were an example. I am proud of you,” he said.

President Mnangagwa also thanked the United States of America embassy in Zimbabwe for supporting and facilitating the team’s visit.

“Kanyemba, in the Zambezi valley is very hot. For the last 38 years of our Independence, we have never had an opportunity of having people from the United States, as a first world, coming to stay for a week in Kanyemba, when I and my ministers have never stayed there for a day. This is commendable”, said President Mnangagwa.

The President called on various Government departments and the corporate world to ensure that the Doma community are made a priority in their programmes, so that they enjoy the resources so many take for granted.

“Whereas current policy is to provide rural health centres within a reasonable walking distance from one’s home, this is not always the case, particularly in some far flung rural areas like Kanyemba.

“Therefore as Government, we are seized with eradicating this challenge and to use the opportunities availed by the new dispensation, to enhance medical infrastructures to rural communities in relatively inaccessible areas,” said the President.
He called on the Health and Child Care Minister Dr David Parirenyatwa to make Kanyemba his priority.

Turning to the challenges faced by the Doma children accessing educational services, President Mnangagwa said he was reliably informed that apart from having a few schools, most pupils walk long distances to get to school. He was also informed that those who are able to attend school do so for just two terms a year.

“Ladies and gentlemen, from the reports I got from the First Lady, there are few schools in Mbire, particularly in Kanyemba, with pupils walking more than 10 km to the nearest school available.

“I am informed that the majority of people attend school for only two terms in the year, since they cannot cross the river during the rainy season.”

The President called on the Primary and Secondary Education Ministry to allocate some schools to Kanyemba from their programme that will see them constructing 100 schools this financial year. “You have a programme which I know, which has been approved for you to build 100 schools. Please allocate some to this area,” he said.

The President also called on Environment, Water and Climate Minister Oppah Muchinguri-Kashiri to ensure that her ministry builds footbridges in Kanyemba.

“We need foot bridges for these kids to cross to go to school, three terms a year,” said President Mnangagwa.
He also acknowledged the role played by various Government departments in enabling the provision of travel visas to the doctors.

The President also appreciated the Kanyemba traditional leadership for their cooperation and hospitality to the visitors. He also commended the services rendered by local medical staff and interpreters.

President Mnangagwa thanked the First Lady for her efforts to turn around the fortunes of the Zimbabwean people, through her Angel of Hope Foundation.

“Meanwhile, she has partnered with the Ministry of Health and Child Care as ex-officio cancer ambassador, and ever since the (cervical cancer) campaign started, thousands of women have been screened by public health institutions and from her mobile health screening bus.

“I am pleased that her office is currently receiving a lot of inquiries as women are growing to be more aware of cervical cancer. But I think it is necessary for this demand for service from our people to be matched by similar attitudes from our captains of industry, to support our people.”

“I am aware of the role played by Musha Mukadzi for the past six months. I am proud that nowhere in the world, all governments in the world, you never find a President and his wife, and the Vice President and his wife doing charity work, but only in Zimbabwe. I was telling the Vice President that we are lucky. Fortunately, they know we are poor, so they don’t bother us. They go elsewhere,” the President said to laughter from the guests.

In closing, President Mnangagwa told the team of doctors: “God blesses those who assist and help. I have no doubt that in your lives, you will receive the Lord’s blessings, by the nature of what you do.”

He also had a special message for US President Donald Trump when he said, “Go ye back to America. I have no doubt that you will bump into Trump. (Applause) But if you do, tell His Excellency President Trump that the people of Zimbabwe are so humbling and very warm. He has no cause to quarrel with them. These are children of God, they are very nice. (Applause) And, we Zimbabweans think the American people, not American administration, they are very nice.”

The leader of the delegation Mr Eric Rose appreciated the opportunity they had to be of assistance to the Zimbabwean people.
“We could not do what we do without the people of Zimbabwe. You are a wonderful people. I love your people. I love your country,” said Mr Rose.