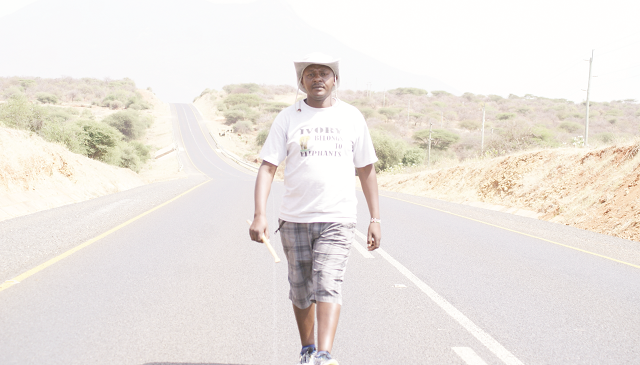 Dumisani Nsingo, Senior Business Reporter
RENOWNED Kenyan wildlife conservationist and Elephants Neighbours Centre co-founder, Jim Justus Nyamu who is on a 42 000- kilometre walk from east to southern Africa to raise awareness on the need to preserve the gigantic animal has arrived in Zimbabwe.

In a telephone interview with Sunday News on Friday evening Nyamu said he arrived in Zimbabwe in the company of his team on 10 September after having left Kenya on 14 July.

“I left Kenya in the company of my team on 14 July, we went through Tanzania, Zambia and now we are here in Zimbabwe on our way to South Africa and then finally Botswana as we seek to raise awareness on the plight of the African elephant,” he said.

Nyamu said he was overwhelmed by the reception he got from the people of Zimbabwe.

“It (walk) has been tough and gruesome but I am glad we were well received here in Zimbabwe by the Mayor of Victoria Falls (Somvelo Dhlamini), who introduced us to a number of officials and it’s been quite a good experience to be in Zimbabwe and I must say people here are very hospitable,” he said.

Nyamu and his team are expected to arrive in Bulawayo on Tuesday.

Wildlife conservationist Mr Langton Masunda applauded the move taken by Nyamu saying it would go a long way in sensitising African countries to conserve their wildlife.

“Any effort to promote conservation is welcome and I think from a Kenyan perspective there is need to raise awareness but from a Zimbabwean perspective we have managed to preserve the elephants to the extent that we need to have a systematic culling programme in place.

“Zimbabwe is open for exporting elephants of course for a fee because it’s business as usual. What the Kenyans should advocate for is not a total ban on the hunting of elephants but to engage with other countries like Zimbabwe with large populations of elephants for trade,” said Mr Masunda.