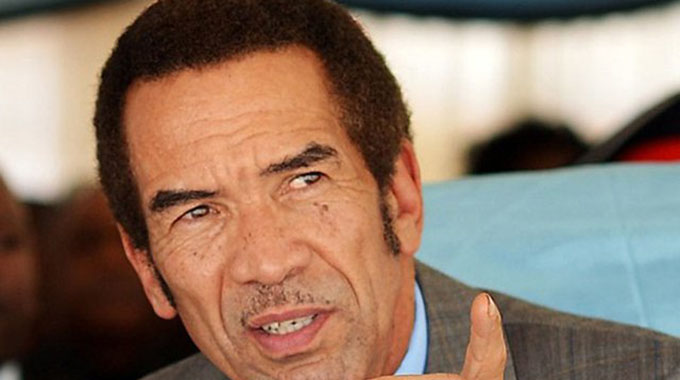 In a statement yesterday, Dr Khama said President Mnangagwa was presenting Zimbabweans with a new opportunity to move the country forward and no one should take it back with violence.

He said President Mnangagwa had since his inauguration indicated that Zimbabwe would follow a new path from that of the past and that the country would also hold free and fair harmonised elections.

“To give credibility to that was to allow international observers to monitor the election process,” said Dr Khama.

“The registered voters of Zimbabwe will on July 30 vote to decide on their choice of Government to take the country forward in the next five years. This after assessing the various manifestos, programmes and policies put forward by the various contesting political parties in the coming weeks.

“For anyone to threaten in a most tragic way, this process by attempting to harm or kill the leadership of the current administration is to oppose what the vast majority want, being peace and prosperity for the country.”

Dr Khama said it was fortunate that the attempt to bomb the leadership failed.

“Resorting to that unacceptable type of display of dissent or any type of violence at all must be strongly condemned by all.”

Dr Khama said it was fortunate that the attempt to bomb the leadership failed.

“Thankfully, the attempt failed and the President is safe and well,” he said.

“May the injured from this ugly incident including Vice President Mohadi enjoy a speedy recovery. I hope and pray for peace and prosperity for the people of Zimbabwe and for successful elections.”

The bombing has been condemned by several organisations, political parties and the international community.

President Mnangagwa said the bombing incident would not affect the July 30 harmonised elections.