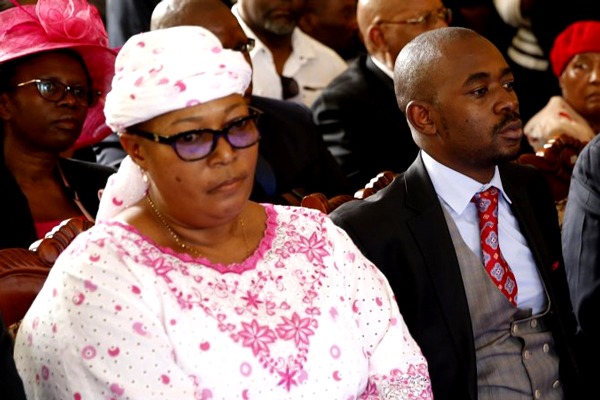 THE Thokozani Khupe-led MDC-T has approached the High Court seeking to be joined as a party to an on-going application filed by Nelson Chamisa-led group, MDC Alliance demanding that the Finance minister should stop disbursing funds under the Political Parties Finance Act to any of the warring MDC parties.

In her application, Khupe’s party claims the money being demanded by Chamisa does not belong to any other party, but to hers.

In the application, the MDC-T cited the MDC Alliance, Justice minister Ziyambi Ziyambi, Finance minister Mthuli Ncube and the Parliament of Zimbabwe, as co-respondents.

In his founding affidavit, 2014 MDC-T’s deputy chairman, Morgen Komichi said the intended beneficiary of the cash demanded in Chamisa’s application had not been cited.

“No reason was advanced for not citing them in the application. From its own papers, the first respondent (MDC Alliance) at all times knew that the applicant (MDC-T) was the person who was claiming the money and deliberately sought not to cite them in order to obtain the order fraudulently,” Komichi said.

“The applicant hereby applies to be joined in these proceedings on the basis that it has a real and substantial interest in the main matter. The money that the first respondent seeks to have released to it legitimately belongs to the applicant.”

Komichi further said the MDC Alliance was born in 2017 when the MDC together with six other political parties signed a “non-compete pre-election pact” adding in terms of the agreement, if the parties had won the presidency, they would have formed a coalition government.

He said the MDC Alliance then won the majority of MPs from the pact and since the election, the money under the political parties fund was entitled to be given to the MDC party, adding that on March 31, 2020, the Supreme Court ruled on the leadership dispute between Chamisa and Khupe which ruling was in Khupe’s favour.