Knives out over Shiri estate 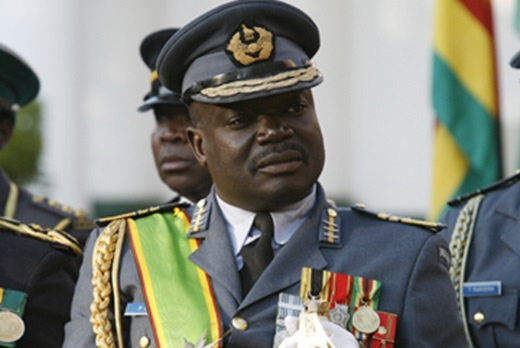 BY MIRIAM MANGWAYA
THE Zimbabwe Anti-Corruption Commission (Zacc) has launched an investigation into the alleged illegal sale of part of the late national hero and Lands and Agriculture minister Perrance Shiri’s estate.

It is alleged that some of the late former Air Force commander’s children were behind the illegal sale of his assets, a year after the decorated soldier died from COVID-19 complications.

NewsDay understands that Shiri’s daughters, Tatenda and Cynthia allegedly connived with Tawanda Zulu, who is reportedly “Shiri’s son”, and sold Shiri’s Rarai Lodges at Arcadia Dam in Bindura for US$1 million to one Kangara, son of the late gold miner, Kudzai Kangara.

All the three are beneficiaries of the late Shiri’s multi-million-dollar estate.

The matter is being investigated by Zacc under case reference number HCR116-09-21.

Shiri’s other daughter Rufaro Stephanie, also a beneficiary of his estate, has reportedly made an application at the High Court seeking to reopen her father’s estate, citing irregularities in the execution process, which includes appointment of executor.

She argued that as the Shiri family trust executor, the resort could not have been sold because it was part of the assets under the family trust.

Rufaro also alleged that the farming area of the properties where Shiri’s Rarai Lodge is located now belonged to Zulu.  She claims that Kangara, who has taken over the resort, is hosting musical gigs every Saturday.

Social media fliers also reveal that Kangara hosts gigs during weekends at Arcadia Dam charging US$20 for VIPs and US$10 for the general public.

Rufaro said she was not consulted when her siblings and Kangara sealed the deal.

“I have distanced myself from anything to do with the estate. I don’t understand how the resort was sold. At first, they claimed it belonged to the government, but I knew that was a lie because my father would not have invested so much in a property that didn’t belong to him. So here we are today. They have sold the resort to Kangara for US$1   million. The question I have for Kangara is how could he have bought something before liquidation? Did he even do due diligence inquiries prior to purchasing the properties?”

Zacc spokesperson John Makamure confirmed that the matter was under investigation. “We have the case and we are investigating it,” he said.

Efforts to get a comment from Kangara were fruitless as his number was unreachable.

Rufaro also challenged the appointment of former Attorney-General Sobusa Gula-Ndebele as executor of the late national hero’s estate, accusing him of bias.

She also accused her siblings Cynthia and Tatenda of drafting a fake 1995 will purported to have been prepared by Shiri, which allocated them more inheritance than the “authentic will”.

In the 1995 will, Shiri bequeathed 50% of his bank savings and insurance policies to his now late son, Titus and the other half of savings to Tatenda and Cynthia, and all other children yet to be born.

A death notice filed at the master of the High Court showed that Tatenda, Cynthia, Zulu, Rufaro Stephanie and Tanaka Shiri, reportedly also known as Tanaka Musvamhiri, were listed as children and beneficiaries of the late Shiri’s estate.

Rufaro questioned why Tanaka and Zulu were included in the distribution list when they reportedly had no national identity documents bearing Shiri’s name, as well as why the other children received shares on Shiri’s properties when the 1995 will stated that they would only get bank proceeds.

“Tawanda stayed with the family for 10 years and still has no ID. Why is Tanaka included in the distribution account as Tanaka Stephanie Shiri when she has no ID? Tanaka is said to have taken DNAs with an uncle and the DNAs matched above 90% to suggest that he is her real father. And then on the master’s appointment, if he was appointed by the will, why is the executor dative not testamentary and the document has a stamp for the 20th when signed on the 21st of August.”

She questioned why a public office would forget to change date stamps.

“The letter also shows Mr Sobusa-Gula Ndebele came as an executor because he was appointed by the Master of the High Court. This proves the long-standing argument that he was no longer the late’s lawyer, that is why he didn’t come to read the will.”

Through her lawyers, Tapera Muzana & Partners, Rufaro Stephanie, wrote to the Master of the High Court on November 3, 2021, complaining about the deliberate and fraudulent omission of some properties in the distribution list of the late minister’s estate.

In response to her complaint, in a letter dated November 9, 2021, the Master of the High Court advised her to make a list of the assets that she alleged were left in the distribution lists.

Rufaro said she would challenge the Master, executor and Tatenda, Cynthia and Zulu’s shenanigans.

Zulu referred NewsDay to the Master of the High Court.

“Kangara had always had his farm in the said area. The Lands ministry can attest to that. His (Kangara) involvement in the matter is not necessary. I will not comment on this issue, but the executor or the Master of the High court can give you answers to the questions,” Zulu said.

Tanaka said she was very sure that she was Shiri’s daughter, adding that she had DNA evidence.

“Whoever is making the allegation is selfish. If we go by the 1995 will, why would the late Shiri list me as a beneficiary to his estate, if it is monetary when he knew I was not his daughter?”

Cynthia refused to comment and referred all questions to Gula-Ndebele.

“My father’s estate is being handled by the executor Ndebele. He is better placed to respond to your questions,” she said.

Repeated efforts to get a comment from Gula-Ndebele were fruitless as he was not picking up calls.

But in an emailed response to a D Ndlovu of Tapera Muzana & Partners last week, Gula-Ndebele & Partners stated that they had handled Shiri’s estate in compliance with the Administration of Estates Act.

“There is no legal basis for expecting a response from our office. We are actually waiting for the view of the Master of the High Court on that letter. We have handled the late General Shiri’s estate in compliance with the law being the Administration of Estates Act and the legally valid will.”

A close relative of the Shiri siblings, who spoke to NewsDay on condition of anonymity, said the row over the late Shiri’s estate among his children was an issue of concern.

“What we wanted was proper distribution of our late relative’s estate in a dignified manner.  We just hope that those involved in the legal procedure of distributing the estate will follow due process.”

Rufaro said no one was above the law in the Second Republic — be it a sister or relative, adding that they should face the music and stop treating her father’s estate like a tuckshop.