South African company, Kings and Queens Funeral Services, says it will will take legal action over the ‘damage to its reputation’ after a South African pastor Alpha Lukau used its hearse while performing a stunt in which he claimed to have resurrected a dead person.

“We would like to distance ourselves from the supposed resurrection of a deceased man by Hallelujah Ministries who allegedly was at our mortuary. We were approached by alleged family members of the deceased who informed us they had encountered a dispute with a different funeral service provider and would like to use our transport services which we offered them.We did not supply the coffin neither did we store the deceased at our mortuary and no paper work was processed by Kings and Queens Funerals. As a Funeral Services Provider we do not offer services without documentation neither do we repatriate bodies without any paper work. We are in the process of taking legal action for this malicious damage to our image,”wrote Kings and Queens on their Facebook page.

During a Sunday service, the high-flying minister known for his lavish lifestyle, encouraged congregants to keep praying for their miracles.

A woman then shouted that a family outside the church was about to repatriate a corpse to Zimbabwe and pleaded with the church leader to go out and see.

The pastor went outside, then asked the workers to take the coffin out of the hearse.

He asked the workers to open the coffin then made some prayerful gestures and seconds later, the man in the coffin rose.

The incident has invited various responses, with many on social media dismissing it as an attention seeking stunt.

Others have come up with information that seems to corroborate the Kings and Queens version. 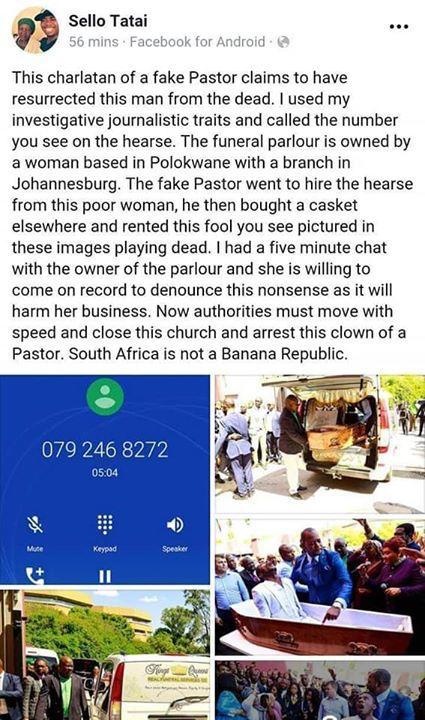