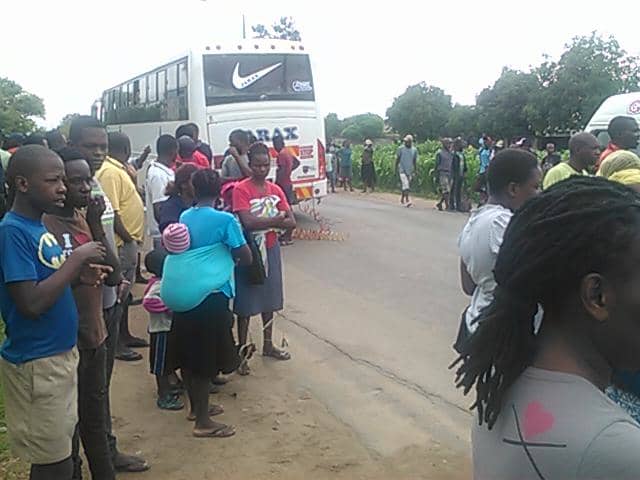 A crowd gathered at the scene of the accident. Picture: Social Media

Herald Reporters
Three people, including two pupils, died after they were crushed by a trailer of a cross-border bus while they were walking along a road in Glen Norah B today. The bus from a local company, Jarax, was coming from South Africa towing a trailer loaded with goods. National police spokesman Chief Superintendent Paul Nyathi confirmed the incident and said investigations were underway.

“The bus was moving along a road in Glen Norah B near Farai bar when the trailer suddenly moved off the hook and hit two pupils who were going to school and a male adult. One child and the male adult died on the spot while the other child died at a local hospital,” he said.

He said it was disturbing that lives were being lost along the roads due to accidents especially those involving long-distance buses.

“Long distance buses are offloading goods and passengers in residential areas contrary to the provisions of the Road Motor Transportation Act and the Road Traffic Act. Bus operators and their crew should stick to the terms of their permits. We are still investigating this unfortunate incident,” Chief Supt Nyathi said.