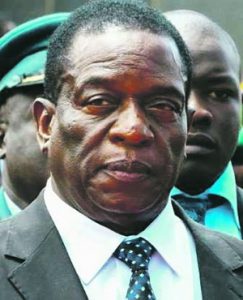 The United States is condemning the attack on a campaign rally for Zimbabwe’s president, which state media has called an assassination attempt.

The US Embassy says on Twitter that “political violence in any form is unacceptable” and contrary to the progress needed to move the country forward and “take its place on the global stage”.

The British Embassy has tweeted a similar statement.

State media says President Emmerson Mnangagwa was not hurt but one of the country’s vice presidents had a leg injury.

The Zimbabwe Herald newspaper calls it an attempt on Mnangagwa’s life. It cites a presidential spokesman as saying Mnangagwa was not hurt and was safely evacuated.

Witnesses say several people appeared to be injured in the blast that occurred in the VIP tent seconds after the president stepped into it following his speech at a stadium in Bulawayo city.

Zimbabwe’s first election since the resignation of former leader Robert Mugabe is July 30.

Zimbabwe state media say an explosion has rocked a stadium where President Emmerson Mnangagwa was addressing a campaign rally. The Zimbabwe Herald reports that the president is not hurt and has been evacuated from the scene.

A presidential spokesperson tells the newspaper that Mnangagwa is now at a state house in the city of Bulawayo, where he had been speaking ahead of next month’s election.

Spokesperson George Charamba says investigations are underway and points out that there have been “multiple attempts” on Mnangagwa’s life over the years.

The July 30 vote is the first without Mugabe since independence in 1980.