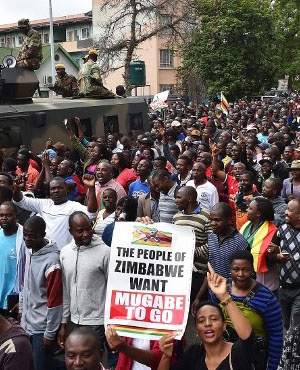 Harare – The youth league of Zimbabwe’s ruling party says President Robert Mugabe should resign and take a rest as an “elder statesman”, while his wife, Grace, should be expelled from the party “forever”.

The Zanu-PF ruling party is holding an emergency meeting to discuss demands to recall Mugabe as party leader.

Youth league leader Yeukai Simbanegavi praises the military for moving against what she describes as a group of “criminals” led by Grace Mugabe.

“It is unfortunate that the president allowed her to usurp executive authority from him, thereby destroying both the party and the government,” Simbanegavi says at ruling party headquarters.

Senior figures in Zimbabwe’s ruling party are gathering ahead of an emergency meeting to discuss calls to expel longtime President Robert Mugabe as party leader.

A Zanu-PF party committee is meeting at headquarters in the capital, Harare. Soldiers are checking vehicles at the gate and a military vehicle is parked inside the grounds. The military has Mugabe under house arrest after moving in last week, angered by Mugabe’s firing of his longtime deputy.

At the edge of the party’s compound, a ruling party banner that showed Mugabe’s face has been partly torn down, possibly by demonstrators who surged through Harare on Saturday to demand that the president resign.

Zimbabwe’s parliament will “definitely” put in motion a process to impeach President Robert Mugabe, the main opposition’s parliamentary chief whip says, adding that they have been in discussions with the ruling ZANU-PF party to act jointly.

Innocent Gonese with the MDC-T party tells The Associated Press: “If Mugabe is not gone by Tuesday, then as sure as the sun rises from the east, impeachment process will kick in.”

The MDC-T has unsuccessfully tried to impeach Mugabe in the past, but now the ruling party has turned against him.

The ruling party on Sunday is likely to fire Mugabe as party leader at a Central Committee meeting. State-run media also says Mugabe will meet the army commander who put him under house arrest for another round of talks.

Clinging to his now-powerless post, longtime Zimbabwe President Robert Mugabe is set to discuss his expected exit with the army commander who put him under house arrest.

And a day after huge crowds rallied in the capital for Mugabe to go, the ruling party’s Central Committee is expected to meet Sunday on demands by provincial branches to recall Mugabe as party leader.

The meeting also is expected to reinstate the vice president whose firing nearly two weeks ago led the military to step in.

Mugabe’s talks with army commander Constantino Chiwenga are the second round of negotiations on an exit with a veneer of dignity as the military tries to avoid accusations of a coup.

This time, the talks do not appear to include a South African government delegation.