John Robertson (85), a highly respected Zimbabwean economist who lived through the rise and fall of the country’s increasingly volatile economy and three successive governments, passed away in Harare on Sunday January 23, 2022. 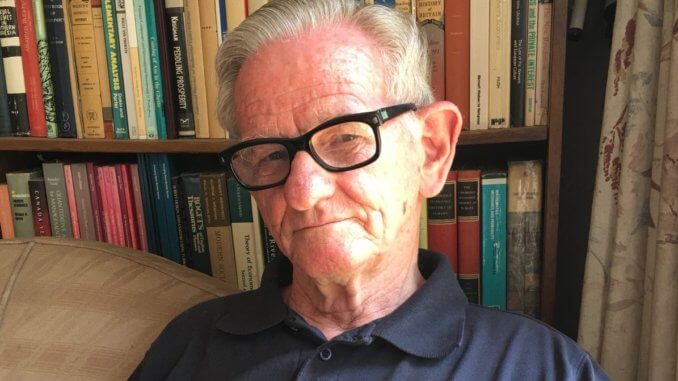 Robertson grew up in Bulawayo, where his father was a builder, so he saw extensive construction and development, particularly after the Second World War in the 1950s. This was during the years of the Federation of Rhodesia and Nyasaland and after the break-up of the Federation.

Robertson initially trained as a radio and television technician with the Royal Rhodesian Air Force, and then with a Bulawayo company, Fenner Brothers.

After 10 years in industry, he enrolled as a student at the University College of Rhodesia and Nyasaland to read for an economics degree.

On completion of the degree, Robertson moved to Salisbury (now Harare) as financial correspondent on The Rhodesia Herald, becoming financial editor a few years later. After nine years in journalism, he joined First Merchant Bank as their chief economist, spending sixteen years with the organisation.

In 1994, he formed his own economic consultancy, with clients that included many large Zimbabwean and multinational companies as well as several embassies. He was a director of a number of companies and a frequent contributor to radio and television news programmes.

He was also a past president of the Zimbabwe Economics Society and of his Rotary Club, and served for many years as chairman of the Economic Affairs Committee of the Zimbabwe National Chamber of Commerce.

Robertson also catalogued the time during full Chapter 7 United Nations sanctions when the economy was growing.  In the 1970s, he put forward a proposal to give title deeds to the communal dwellers.  It was turned down by the Rhodesian Front government of Ian Smith.

After independence from Britain in 1980, Robertson put forward the proposal again.  It was also turned down by the government of Robert Mugabe for the same reason: the political authorities did not wish to relinquish control over the people by giving them ownership of the land that they lived on.

Robertson was in a prime position to then catalogue the disastrous effects of farm invasions which were initiated in February 2000, and the nationalising of privately-owned farmland in Zimbabwe in 2004.

With the resultant and unprecedented economic collapse, Robertson saw the Mugabe government print money, resulting in inflation going into free fall. Consequently, the 100 trillion dollar notes, introduced in January 2009, could not buy a loaf of bread.

“John was a straight man,” said Freeth.  “In a crooked world, and in what has become an even more crooked country, he was always a person of integrity who was reliable in supplying the unadulterated truth about the economic situation in Zimbabwe.”

The British Ambassador to Zimbabwe, Melanie Robinson, said she was very sad to hear of the passing of Robertson. “He always offered such sage advice and analysis, with integrity and humanity. I will miss him.”

Concluded Freeth: “John was respected by all who knew him as a humble and supremely credible person.  He was always helpful, always reliable and was blessed with a good measure of solid, old-fashioned common sense.  He will be deeply missed by Zimbabweans, diplomats and the international financial community.”