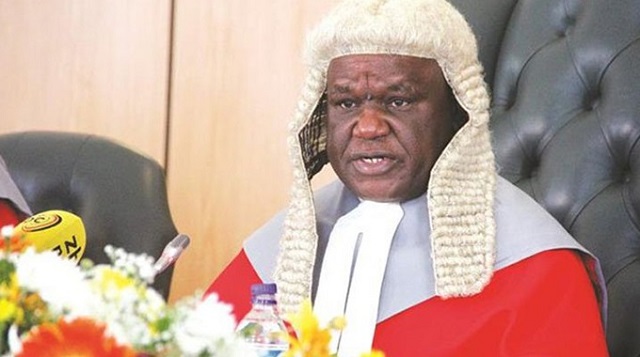 Leonard Ncube, Victoria Falls Reporter
THE Judicial Service Commission (JSC) has made huge strides towards enhancing access to justice for all citizens through various initiatives which are at various stages of implementation, Chief Justice Luke Malaba said.

Speaking at the Bar-Bench Colloquium — an academic meeting for JSC and Law Society of Zimbabwe (LSZ) officers made up of judges and lawyers including their secretariats which ended in Victoria Falls on Saturday, CJ Malaba said JSC had in the past two years been working on reform of various court rules a process which he said was almost complete. He implored JSC and LSZ to diligently work together as they were both key to effective and efficient justice delivery system.

“JSC has for the past two years been working on reform of various court rules and that process has seen so far the enactment of the Constitutional Court rules, Supreme Court rules and Labour Court rules. The Magistrates’ Court rules have been finalised and await gazetting.

“To enhance access to justice, allow me to advice delegates that the first phase of the JSC efforts to introduce an electronic case management system is now complete. All stakeholders participated in one way or another and a committee which was spearheading the process recently submitted the report and soon I will appoint another committee to oversee implementation,” he said.

CJ Malaba said the court rules were products of collective efforts and active participation of members of judiciary, law society and other stakeholders. He said the judiciary and legal profession have a relationship sanctioned by the Constitution.

“There must be mutual understanding that the relationship is a professional one designed for the achievement of the common objective of expeditious delivery of justice. Each stakeholder therefore is required to perform professionally and diligently to enable efficiency in the system.”

He reiterated the need for mutual respect to maintain professional relations between the bench and the bar, adding that failure by one stakeholder to perform duties would naturally affect the efficiency and effectiveness of the systems.

The theme of the three-day conference which ended yesterday was: “Enhancing access to justice through law reform.”
Former South Africa Chief Justice (Retired) Sandile Ngcobo who was guest speaker said access to justice and information as well as knowledge about the role of legal representation were key aspects of justice delivery.

He said: “A well functioning justice system protects individuals and businesses from infringement of their legal rights by others, and promotes social order and reinforces civic values and norms enshrined in the Constitution.”

LSZ president Mr Misheck Hogwe called for a warm and cordial relationship within the legal profession adding that an effective and efficient justice system would see Zimbabwe exporting justice outside borders.

The judicial colloquium is a critical platform for the legal profession to constructively engage for the good of the justice system.