Built in 1947 for children of workers of the once thriving Vanguard Gold Mine in Mberengwa, a three-block primary school, which appears to have stood the test of both time and taste, has come under increasing pressure from both nature and Man.

Nature has taken the lustre out of the school whose foundation is rooted in gold rich earth. Unforgiving, nature’s armoury unleashed salvoes on the white washed walls, which are now peeling off; and greyish roofs, now tottering with age.

Not to be outdone, man has done all he could, either in response to nature’s calling through the largess laden in her womb, or his inherent propensity for destruction.

Named after the mine, Vanguard Primary School has nurtured generations of pupils whose connection, through their parents or guardians, was gold. 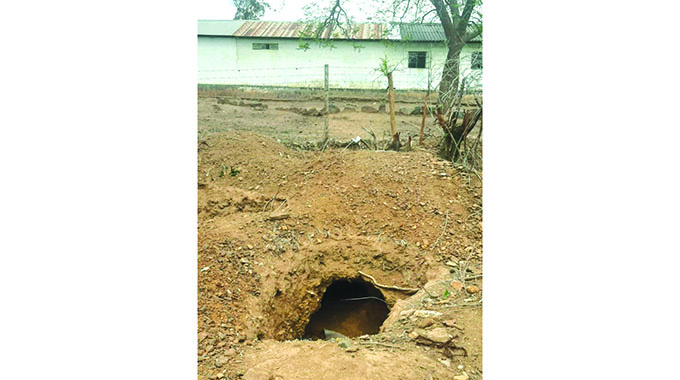 However, time has not been forgiving, as the school is now under threat from illegal gold panners, newly attracted by the lustre of gold.

Rich gold veins have recently been discovered around the school’s boundaries and environs.

Long after the original Vanguard Mine was closed due to diminishing gold deposits, artisanal miners, commonly known as makorokoza, became the new vanguards of the compound, which had continued to exist.

As scores of panners responded to the cry for instant riches, leading to a gold rush to the Vanguard area, the school and the compound fell victim.

Armed with picks, hoes, digging sticks and shovels, throngs of panners have been tunnelling everywhere around the school and the compound in search of the precious mineral.

The crazy stampede for the yellow metal has not spared teachers at the school, thus, bringing lessons to an abrupt halt.

In the last two weeks, police have been fighting running battles with the hunters of fortune, as authorities seek to restore normalcy, and save the school from further degradation.

When The Herald visited the school recently, the situation was calm, with police having since erected a roadblock to control human and vehicular traffic heading to the area.

However, some adamant panners have continued to play hide and seek with the law enforcement agents.  The digging and panning for alluvial gold around the area continued, albeit under the cover of darkness.

The more defiant ones have continued to mine during the day.

Residents and teachers interviewed said the situation was slowly returning to normal, with the police making intermittent patrols to ward off the panners.

“You can do a tour and make an appreciation for yourself to see how illegal panners have destroyed the area,” said Mrs Melisa Mapholisa, a resident at the compound.

“They have been digging everywhere, and are now advancing into the school yard. The situation is only calming down now with the intervention of the police.”

Another local, Mr Aaron Chigaba, said the challenge was that even residents and parents with children at Vanguard were wantonly digging around the school and compound in search of gold.

A teacher at the school, who requested not to be named, said they had also joined the gold rush.

He said panners were continuing to invade the school and compound at night.

“We sponsor some of these night syndicates, and it has been helping us a lot in terms of cash,” said the teacher.

However, some panners said they were eking out a living through gold panning, and would not be deterred by police patrols.

The fortune seekers, who professed ignorance to the land degradation they were causing around the school, said the existence of new gold rich samples could see them digging their way under classroom blocks.