“ … the military will not hesitate to step in. Zanu PF’s standing political virtues are a product of faithful adherence to the founding values, decorum, discipline and revolutionary protocol in the ruling party”. — Zimbabwe Defence Forces (ZDF) commander General Constantino Chiwenga (pictured) on November 13 2017. 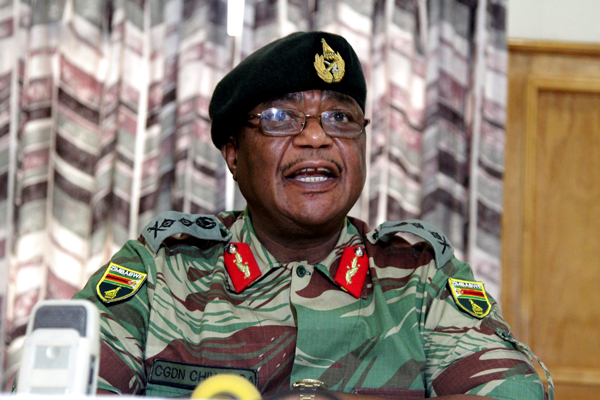 After the Mgagao Declaration, Ndabaningi Sithole dramatically lost control of the levers of Zanu and thereafter his status as a mainstream leader of the nationalist movement was tenuous at most. His successor, Robert Gabriel Mugabe’s tenure and the preference for a successor are being dictated by ZDF’s Operation Restore Legacy (ORL).

Our past and present keeps following us into the future and as long as we do not think differently, years down the line we will be saying de javu. In this latest instance, the impact has gone beyond the confines of party politics due to Mugabe’s state presidency. This opinion piece presents a bold argument for a revisit of the Zimbabwe constitution to re-align it with the organic democratic reality of our polity.

I argue that the theoretical frame, which dominated the constitution making process, was a normative liberal democratic prism, which created obvious opportunities for flouting. I will use two examples, namely the role of the ZDF as envisaged in Section 212 and traditional Leaders as expressed in section 281. I will also mention four case examples of tailoring democracy to the organic national realities, drawn from the United Sates, United Kingdom, China and Iran.

So what is at issue? The ZDF-led ORL has laid bare four truths. Firstly, it has confirmed the army’s vested interest in Zanu PF. In the words of Chiwenga: “It is pertinent to restate that the Zimbabwe Defence Forces remain the major stockholder in respect to the gains of the liberation struggle and when these are threatened we are obliged to take corrective measures.”

Secondly, in pursuit of their objectives, the ZDF flouted Section 212(a) and (b) of the constitution, which confer exclusive power to the commander-in-chief to (a) authorise the deployment of defence forces and (b) power to determine the operational use of the defence forces. The caveat is that the president absolved the army of any wrongdoing during his November 19 address to the nation. Whether this it is political or legal it is for experts to decide.

Thirdly, the chilling precision with which this operation was carried out to stem the tide of internal Zanu PF creative destruction is instructive and leads us to the fourth truth which in all intents and purposes makes a mockery of the real value of multi-party electoral democracy provided for in the constitution. It is impossible in the present and in the near future to envision a transfer of power from Zanu PF to another party. These are realities that we need to confront beyond the normative liberal democratic niceties.

The army and the traditional leadership are critical in advancing the notion of substantive democracy in Zimbabwe. There are two options that can be done. The first is to pretend everything is fine and continue going through the ritual of procedural democracy where pseudo contests take place and in the spirit of competitive authoritarian dispensation, the opposition is allowed to do well but not too well to claim the substantive policy making power of the Presidency. This is the prevailing situation.

The clamour for “electoral reforms” is misplaced as it seeks to address symptoms rather than the cause of the problem. We need as a nation to confront the elephant in the room. Zanu PF has “title deeds” to the liberation heritage and they have a sense of entitlement to rule. Furthermore, the army “command element” was first and foremost political guerillas before they became professional soldiers and would always find it difficult to stay out of politics as the events of the past two weeks have shown.

The second option is to create a truly Zimbabwean solution so that we move from stage-managed and procedural to real and substantive democracy. Before I give my suggestions, let me turn quickly to examples of countries that denote context specific arrangements.

In the UK, the Windsor Royal Family is above politics and plays the role of unifying and converging force in British politics. All prime ministers, when they assume or leave office, go through the ritual visiting Buckingham Palace to meet the Queen. They decided to create their reality and their system of government notwithstanding the tumultuous French Revolution next door, which swept away the Bourbons.

In the US, their powerful nine-member Supreme Court judges are appointed for life. The Supreme Court plays a key role in the stability of US Republican government and its stability, as an institution is the opposite of the expected turnover in the executive and legislative branches.

In Iran, there is a combination of elected and non-elected bodies that combine a mixture of theocracy and democracy. It has different institutions such as the Guardian Council, the assembly of experts — which appoints the Supreme Leader and an elected legislature and president.

In China, the People’s Liberation Army (PLA) has traditionally played a role of safeguarding the Chinese Communist Party-led revolution and has been integrated with the ruling elites through the 11-members Central Military Commission (CMC). One interesting point to note is that the influence of the army in Chinese politics has reduced simultaneously with the phasing out of the generation that participated in the Chinese revolution. Mentioning these is not to contend that they are perfect examples for Zimbabwe to copy, but to illustrate the varied and context specific nature of different Institutional arrangements across the world. Trias Politica is not the only way!

Finally, how can we do this alignment of the national constitution to fit the organic realities of the land? Firstly, we have to come to terms with the fact that no matter our protestations and good intentions especially champions of democracy, there will not be any movement in terms of moving these two institutions from the position of political privilege. The effort done during the constitution-making process was excellent in normative terms but disappointing in practical ways.

I suggest that instead of moving the institutions negatively out of politics, what stops us from moving them positively into positions of guarantor of political contests? This may sound a tad loony due to its outrigtly lateral disposition but wait a minute: given the events of 2008 and the 2017 ZDF ORL, the opposition will never be allowed to assume power in Zimbabwe, at least in the distant future as long as the “guardians of the liberation struggle live”.

Secondly, the protestations of the opposition and media will not stop the chiefs from consorting with the ruling elite and endorsing political candidates in the ruling party as well as obstructing opposition access to potential voters in their areas — (the rural vote constitutes around 65% of the voting population). Given these realities, how about doing a win-win trade-off by taking away the voting rights of the ZDF and the traditional leaders and confer to them the Guardianship status of our democracy?

Imagine the idea of traditional leaders with the perks of their dreams and the political adjudication authority to fairly allocate access to voters and to moderate political discussions between and amongst parties. Imagine the idea of an army with guardianship status that is secure in its role that is safe from neo liberal security reform and that in reality guarantee support to any government emerging from an electoral process. If we do not imagine it, we will only witness “Zanu PF ichangotonga vanhu vepro-democracy vachingovukura” (Zanu PF will continue ruling while pro-democracy activists continue barking).

Batsani Ncube is a Chevening Scholar reading Elections, Campaigns and Democracy at the Democracy and Elections Research Centre, Royal Holloway, University of London. These are his personal views. — ibncube@gmail.com