‘Let’s confront our past’

Source: ‘Let’s confront our past’ | The Herald

Fungi Kwaramba
Political Editor
THE Second Republic has the political will and boldness to confront the past so as to ensure national healing and closure, President Mnangagwa has said.

In his speech on the occasion to mark the signing of the historic Unity Accord that was signed on this day by the revolutionary parties, ZANU and ZAPU, in 1987—the President said the Accord brought about peace which must forever remain a key feature of national development.

“Peace-building, conflict-resolution and management must remain a binding feature of our national development agenda. Where there are differences, we must aim to settle and resolve them through dialogue and engagement. Further guided by our national Constitution, heritage and traditional value systems; toxic politics and divisive tendencies have no room in our society. By and large, we are a peaceful people and nation.

“My administration has the political will and boldness to confront the past and bring about healing and closure”.

“I am encouraged by the success we are scoring towards building greater national cohesion and singleness of purpose informed by lessons from the disturbances which characterised the early years of independence. To date, a concrete course of action has been drawn out following inclusive interventions and meetings held with traditional leadership and stakeholders of Matabeleland Provinces and parts of Midlands Province,” he said.

The President described unity as the bedrock of national stability which must be entrenched through the full participation of all Zimbabweans through policies such as Devolution.

“Decades have passed since that historic event of our Unity Accord. However, its conceptualisation must now go beyond narrow interpretation. Therefore, today as we remember and celebrate Unity Day, let us re-commit ourselves to the important virtues that bind us as a people and equally incorporate the importance of our unity within the transformative national economic agenda”.

The President said the common goal for every Zimbabwean is to continue strengthening the unitary State that is Zimbabwe and which is home to multiple cultures, “all co-existing in harmony under one flag and one national anthem. Individually and collectively, we bear the responsibility to bequeath present and future generations, an economically developed, modern and prosperous country”.

Zimbabwe is one of the most peaceful nations in Africa and a destination of choice for tourists thanks to the Unity Accord, which remains key to driving the country’s development agenda towards Vision 2030, to become a middle class economy.

“As we focus on the future and inspired by the new national trajectory of economic development; I challenge us all to draw from the fundamental principles of the Accord to unify and collate our national capabilities, competencies and skills for the attainment of Vision 2030.

“On its part, my administration remains decisive in ensuring that all Zimbabweans have a sense of belonging and that they flourish and prosper leveraging on their potential and abundant natural resource endowments. This is indeed what our Founding Fathers envisaged when they committed to entrench unity as a critical pillar of our great nation”.

And towards equalisation and development that leaves no one behind, under the Second Republic budgeting, administration and the execution of development projects is being done in a way to give a voice to communities. 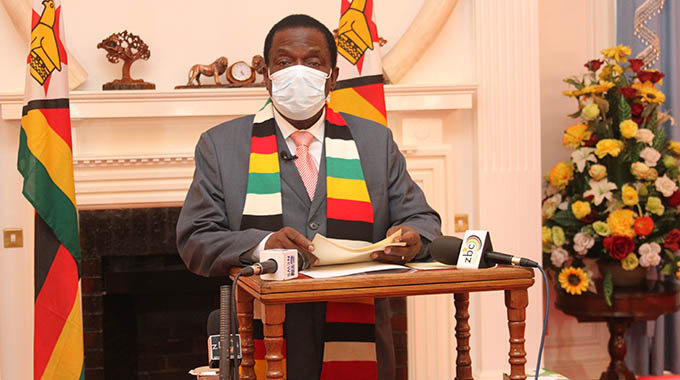 “We have shifted our development paradigm to be more people centred. In this regard, my Government continues to diligently implement the Devolution Policy. This transformative policy is informed by our desire and commitment to bring about balanced growth, modernisation, industrialisation and overall development which leave no one behind and no area of our country behind.

“The policy further underpins and reflects our pursuit to preserve unity and peace through the democratic participation of all nations in national development,” he said.

Demonstrating the Government’s commitment towards the Devolution Policy, $19.5 billion dollars was allocated for implementation of devolution projects across the country so as to ensure that the “development course and destiny of our communities is in our hands”.

“The completed and ongoing road, energy, mining, agriculture and irrigation development projects, among others, are impacting communities, and engender inclusive national development and progress”.

The President said Zimbabwe should reap from the successes gained under the Transitional Stabilisation Programme as the country prepares to implement the National Development Strategy 1 from next year to 2025.

In the spirit of unity, not only within but also with other nations, the President saluted Botswana for bringing back Zimbabweans who had sought sanctuary there as well as Kenya for according to the Shona speaking community citizenship in that country as well as recognising the language as official.

“As we move into the future, we must broaden the significance of Unity Day by recognising that unity and peace must be firmly rooted in our day to day interactions, daily chores and activities. In the spirit of this Unity Day, I further urge families, communities, organisations, churches and other institutions to embrace national symbols such as our diverse languages, music, art and dance as well as our national fabric and dress to reinforce our oneness, national pride and identity.

Such an attitude will rally us to unleash our full potential towards an economically prosperous and empowered society and the realisation of the Zimbabwe we want”.

President Mnangagwa has been leading from the front in planting the seeds for peace, unity and reconciliation and his administration has embraced all progressive political parties under the Political Actors Dialogue (POLAD) that was established after the 2018 elections to entrench national cohesion and progress.

Just last week, the MDC dominated Victoria Falls council honoured President Mnangagwa in a major highlight of what can be achieved when political parties act in the national interests.