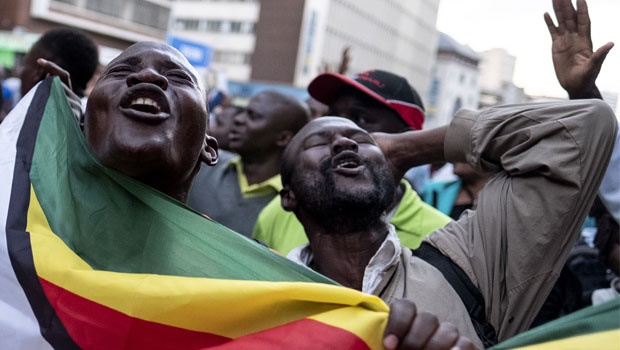 ShareIcon
A top Zanu-PF official has tweeted a a video of cars burning in capital Harare. He says  “anarchists whose pre-occupation is power at any cost” are responsible for the violence currently taking place in the southern African country.

The Security forces have to quickly assert the rule of law. Those who are inciting the people are not democrats. They are anarchists whose pre-occupation is power at any cost. But we chose democracy, and democracy is what we witnessed pic.twitter.com/TJxKgsC1ke

ShareIcon
BBC is reporting that an election banner with the face of  President Emmerson Mnangagwa has been removed in Harare by supporters of opposition presidential candidate Nelson Chamisa.

ShareIcon
Sky News has tweeted a video of people taking cover after multiple shots were heard in Harare.

#BREAKING: Civilians were forced to take cover after multiple shots were heard as supporters of Zimbabwe’s main opposition party marched through Harare to protest the country’s election result.

“Don’t direct the politics with guns. Please, we are begging you,” Zimbabweans are pleading as armed security forces are on the streets of the capital and sporadic gunshots are heard.

Live video by The Associated Press from Harare shows smoke rising from burning vehicles and opposition supporters scattering after they protested alleged manipulation in Monday’s election.

Election observers from the European Union and United States urge that results of the presidential vote be released as soon as possible to avoid “volatility”. – AP

ShareIcon
An eNCA journalist has tweeted a video of an army helicopter in Harare.

ShareIcon
A British Financial Times newspaper journalist has tweeted that ‘masked soldiers are beating up people’ in Harare.

16:02 ShareIcon
One man was shot dead, AFP witnessed, after the Zimbabwean army opened fire in central Harare on Wednesday as protests erupted over alleged fraud in the country’s election.

The man died after being shot in the stomach, an AFP photographer said, confirming that he died at the scene. – AFP