LIVE: Cde Mnangagwa inauguration as President and Head of State 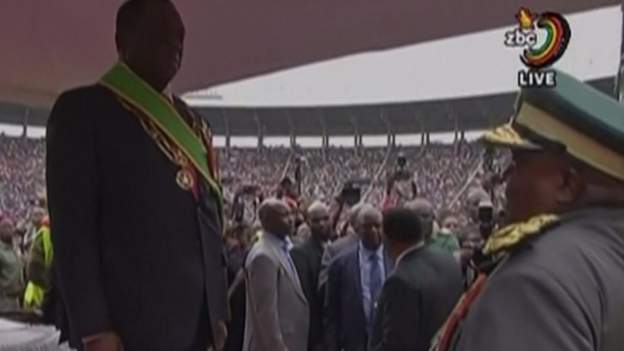 PRESIDENT-designate and Zanu-PF First Secretary Cde Emmerson Mnangagwa will today be sworn-in as the country’s Head of State and Government and Commander-in-Chief of the Zimbabwe Defence Forces with several Sadc leaders here to witness the occasion.

The Herald Online gives you updates of this historic and important event. Stay logged in and be free to participate in the Disqus discussion below. 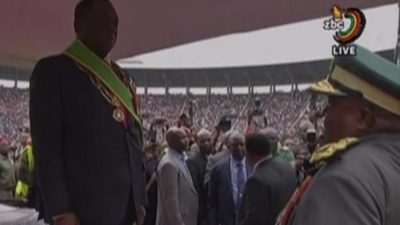 10:00– Botswana President Ian Khama is the first Head of State to arrive. He says he expects to strengthen relations with Zimbabwe and its new administration.
President Khama was followed by Zambia President Edgar Lungu.

President Lungu arrived in the company of former President Kenneth kaunda. President Lungu hails the  manner in which Zimbabwe conducted its transition, saying it shows the growth of democracy in Zimbabwe and the SADC region at large. Former Zambian President Rupiah Banda is also part of the delegation
10:15 – Namibian Vice President Nickey Iyambo arrives leading a delegation that include former  Presidents Sam Nujoma. Also just arriving is Mozambique President Felipe Nyusi who says Mozambique is with the people of Zimbabwe in this transition.

10:20 – At the venue of the event, the National Sports Stadium, Service Chiefs led by Commander of the Defence Force Dr Constantino Nyikadzino Guvheya Chiwenga have taken seats. They arrived shortly after the Mayor of the City of Harare, His Worship Benard Manyenyeni.

10:25 – All dignitaries have taken seats and are ready to welcome President elect, Hon Mnangagwa who is set to arrive shortly.

10:42– Amid cheers, the President elect, Hon Mnangagwa who is accompanied by his wife, Cde Auxillia makes grand entrance into the stadium.

10:50 -Botswana President lan Khama has just left the HICC heading to the venue of the inauguration.

10:51 – As the multitudes wait for the arrival of visiting Heads of States, Jah Prayzah is invited to the stage and he takes off with “Kutonga Kwaro” much to the amusement of the crowd.

Zimbabwe’s first President after independence was the late Reverend Canaan Sodindo Banana. He was President at a time Cde RG Mugabe was Prime Minister with the latter assuming the Vice Presidency later. Cde RG tendered his resignation on November 21, 2017.

11:12 – Thunderous welcome for the President of Botswana, Ian Khama as he gets into the Stadium.

11:16 – Mozambique President Nyusi makes his way through the arena to join other Heads of State who are here for the inauguration of Cde ED Mnangagwa as Zimbabwe’s President following the resignation of Cde RG Mugabe on November 21, 2017.

11:34 – Speaker of Parliament Advocate Mudenda calls upon Chief Justice Luke Malaba to call upon Incoming President to proceed and take Oath of Office.

11:39 – In Section 94 of the Constitution the Incoming President now takes Oath of Office.

He takes oath of office and commits to uphold the constitution, promote whatever protects Zimbabwe and oppose whatever harms it.

He is followed by Commissioner General of the Police, Augustine Chihuri.

11:56 – The Master of Ceremony appeals for order as people express displeasure at Commissioner General Chihuri yelling, “Ngaaende! Ngaaende! (He must go! He must go!)

11:59 – Zimbabwe’s new First Lady Cde Auxillia Mnangagwa joins His Excellency President ED Mnangagwa at the podium to congratulate him and the two share a kiss . . .

12:00 -The National Anthem is now being sung followed by the gun salute. . .and a fly past of military jets.

12:07 – Parade Commander invites the President to inspect the Guard of Honour  accompanied by  Commander Defence Forces.

DUE TO NETWORK FAILURE we are unable to avail images at the moment. Will download and flood them as soon as we have them.

Newer Post
Twenty-one-gun salute and fly past; crowds cheering after each cannon fire
Older Post
Crocodile tears for Mugabe: Cartoonists in Africa are quick on the draw