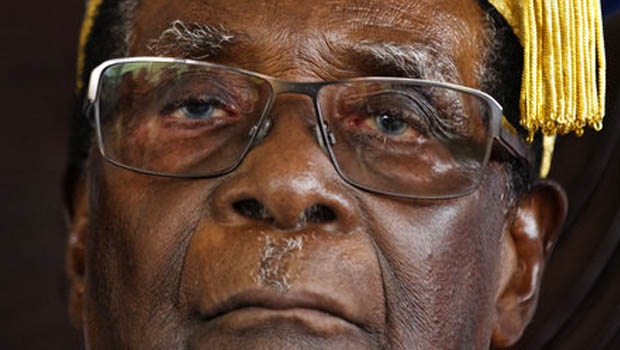 Zimbabweans are expected to converge in their big numbers on Saturday for a protest against President Robert Mugabe who has ruled the country for 37 years. Follow the live updates.

‘Go, go, our general,’ giddy Zimbabweans say as they gather to march against Mugabe

Euphoric crowds have gathered in Zimbabwe’s capital to demand the departure of President Robert Mugabe after nearly four decades in power.

In a colourful gathering that even days ago would have drawn an immediate police crackdown, Zimbabweans giddy with joy raced through intersections, raising their arms in triumph. Young men shouted, laughed and embraced.

Some had posters with an image of the military commander who swept in earlier this week and put Mugabe under house arrest, with the slogan: “Go, go, our general!!!” Marchers handed flags to soldiers, who accepted and waved.

“It’s like Christmas,” said one marcher, Fred Mubay, who said Zimbabweans have been suffering for a long time.

The 93-year-old Mugabe, the world’s oldest head of state, is said to be asking for more time amid negotiations that seek his exit with a veneer of dignity. 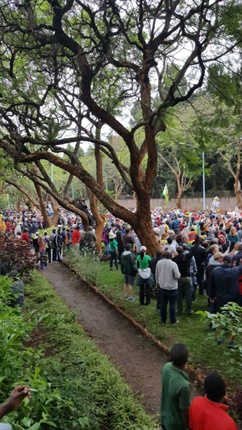 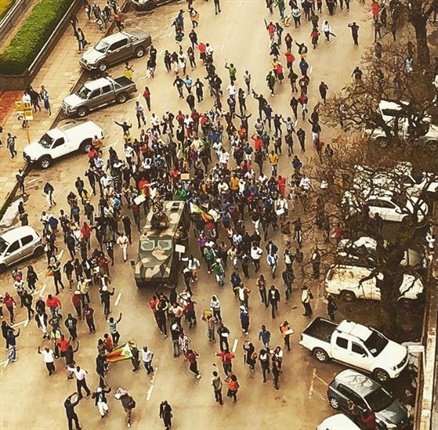 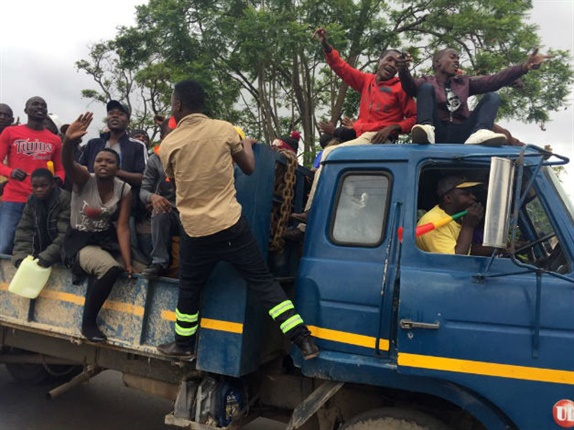 A motion of ‘no confidence’ in embattled Zimbabwean President Robert Mugabe has reportedly been tabled in parliament by an opposition lawmaker, according to a report.

According to NewsDay, the motion was filed early this week and was expected to get support from across the political divide.

Unnamed sources said MDC-T Mabvuku-Tafara lawmaker James Maridadi had notified the speaker of parliament of his intention to move for a motion to impeach Mugabe. 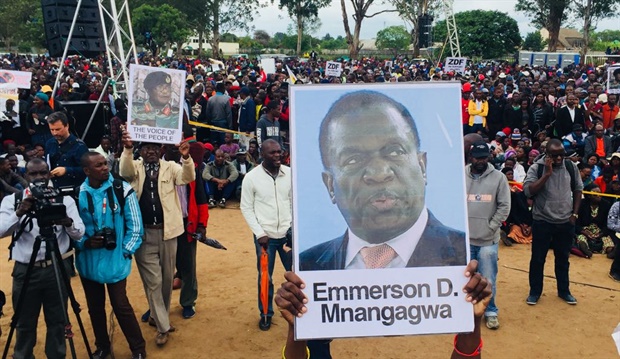 Zimbabweans have come in their thousands to take party in the anti-Mugabe rally. (News24)

Watch this video posted on social media showing the excitement in Harare.

A message for President Jacob Zuma… 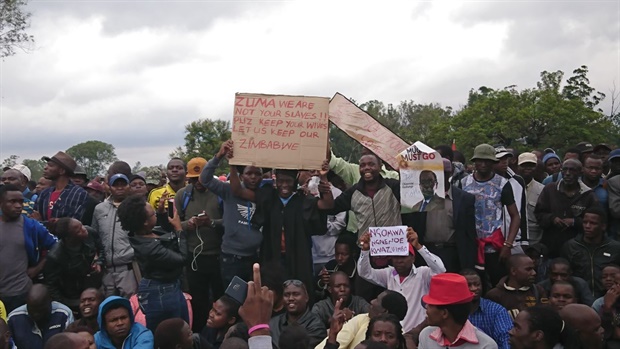 Mugabe ‘must go today, not any other day’, protesters chant at #Anti-MugabeRally

Zimbabweans have on Saturday started gathering at the Highfields sports ground in Harare, calling for President Robert Mugabe to step down.

Some called it a historic day, hoping for change after Mugabe’s nearly four decades as president. Some had the national flag draped around their shoulders.

As a group of soldiers arrived at the stadium, they were met with cheers and song.

Zimbabweans at Highfields Sports Ground with the Zimbabwe national flag draped around their shoulders. 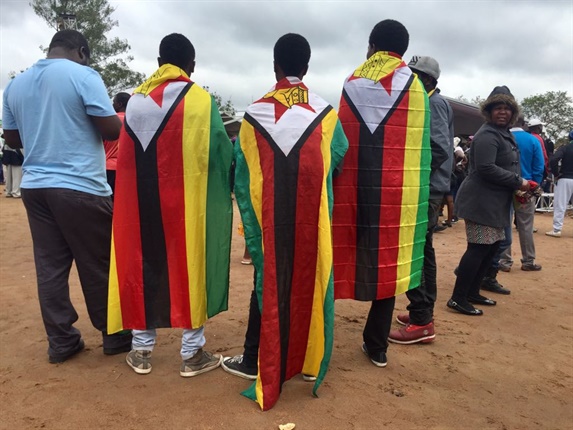 ‘Mugabe no longer has regional backing, he must go,’ says Botswana leader

Botswana’s President Ian Khama has told his Zimbabwean counterpart Robert Mugabe to step down as he no longer has any regional support to cling on to power, says a report.

According to New Zimbabwe.com, Khama said that the military intervention in the southern African country has also “presented an opportunity to put Zimbabwe to a path of peace and prosperity”. 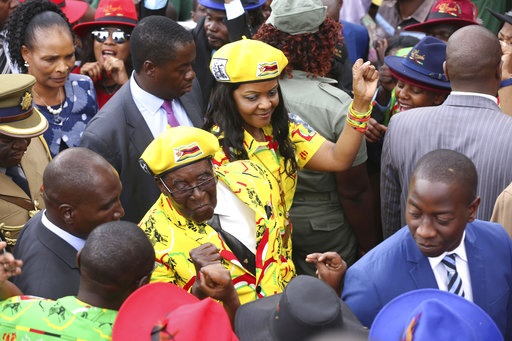 ShareIcon
Zimbabweans in Cape Town are also on Saturday set to join the march against Mugabe. They are demanding that the African Union and the Southern African Development Community “keep your hands off political standoff” in Zimbabwe. 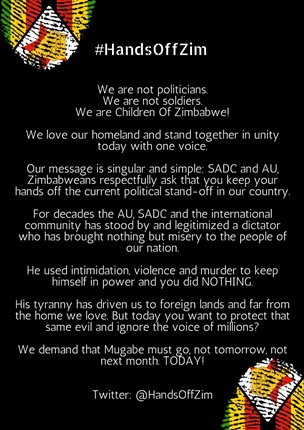 “Mugabe must go… It’s time for him to rest,” reads another placard. 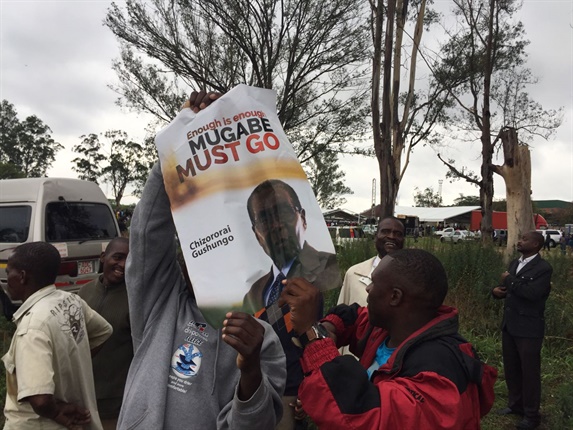 Protesters tell the Mugabes that Zimbabwe is not a private company – in one of the placards. 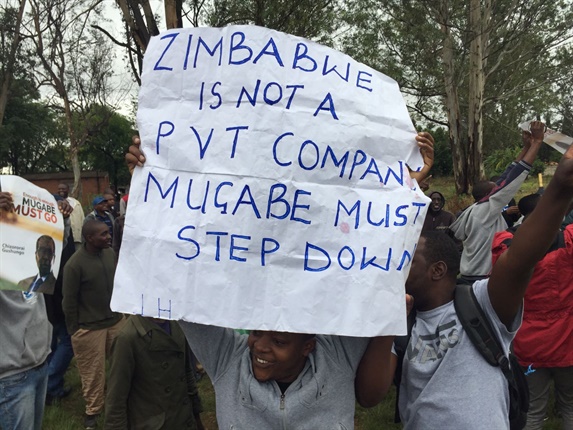 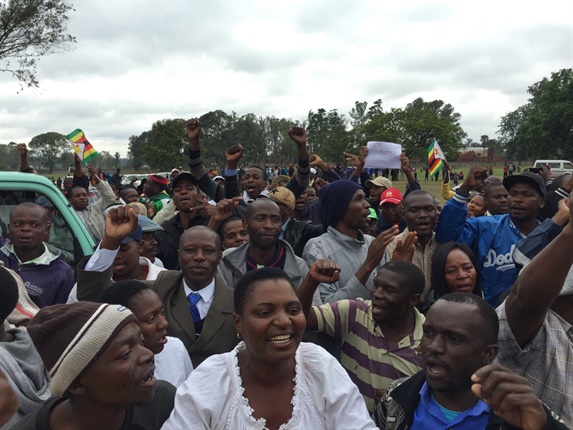 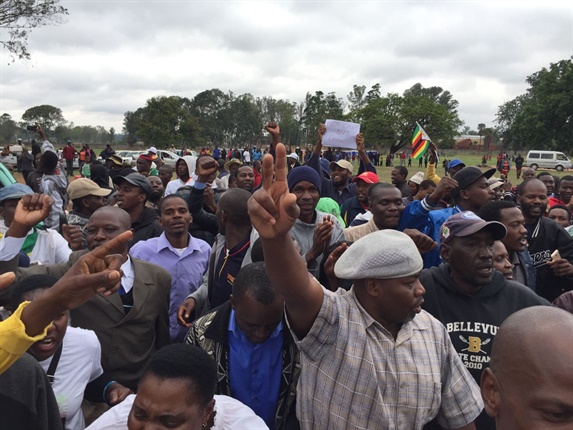 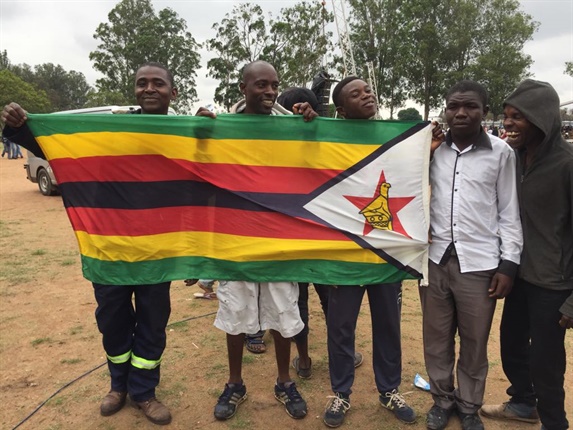 Scenes from Highfields sports grounds where thousands of Zimbabweans are expected to converge as they rally against President Robert Mugabe who has ruled the southern African country for 37 years. (News24 team) 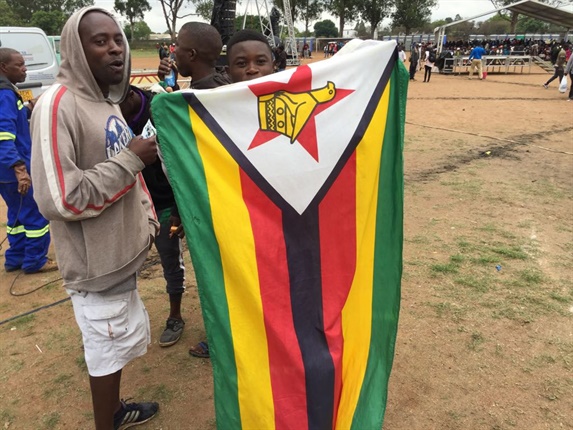 Zimbabwe is set for more political turmoil on Saturday, with protests planned as veterans of the independence war, activists and ruling party leaders called publicly for President Robert Mugabe to be forced from office.

The marches will cap an unprecedented week in which generals seized power and put Mugabe under house arrest in a stunning turnaround for the president who has ruled since 1980.

The 93-year-old autocrat did not resign in talks with the army chief on Thursday and sources suggested the veteran leader was “buying time” to negotiate an end to his 37 year reign. – AFP

Zimbabwe’s defence minister Sydney Sekeremayi has spoken for the first time since the military took over on Wednesday.

According to the state-owned Herald newspaper, Sekeramai, who addressed junior staff course number 68 graduands at Zimbabwe Staff College on Friday, said that the country’s sovereignty was non-negotiable and would never be bought or sold.

“I, therefore, urge you to remain vigilant and patriotic as some elements bent on reversing the gains of our independence are always looking for the slightest opportunity to exploit,” he said.

“Defence of our sovereignty is non-negotiable and it will never be bought or sold, therefore, the onus is now upon you to ensure that these gains are preserved for prosperity as we pass the button to you.”

The Zimbabwe Defence Forces (ZDF) said in a statement on Friday it had been approached by organisers of the rally, which it described as a “solidarity march”.

The statement went on: “ZDF is therefore advising the nation that for as long as the planned march remains orderly, peaceful… and without hate speech and incitement to cause violence, it fully supports the march.”

Liberal groups opposed to the president have also backed the protest. – BBC 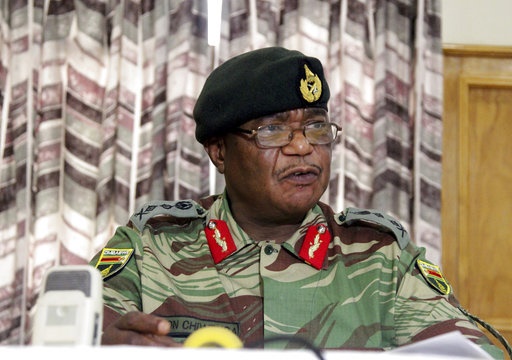 BBC is reporting that in an unprecedented broadcast, several regional leaders have appeared on state TV saying that Mugabe should step down.

They also called for his wife Grace Mugabe to resign from the Zanu-PF party, and for ex-vice president Emmerson Mnangagwa to be reinstated in the party’s central committee.

The party’s members agreed to mobilise support for and attend Saturday’s rally. The party is planning to hold a special central committee session over the weekend to discuss the crisis. 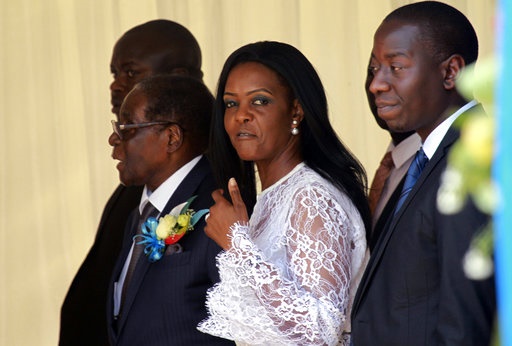 Zimbabwe’s state-run Herald newspaper says all 10 of the ruling party’s provincial branches are calling for President Robert Mugabe and his wife to resign, and they seek a special Central Committee meeting within two days.

The report late on Friday also says the party branches seek the reinstatement of former vice president Emmerson Mnangagwa, whose firing last week led the military to step in and put Mugabe under house arrest.

As calls for Mugabe’s departure grow, the ruling party appears to be positioning Mnangagwa to represent it in next year’s elections. 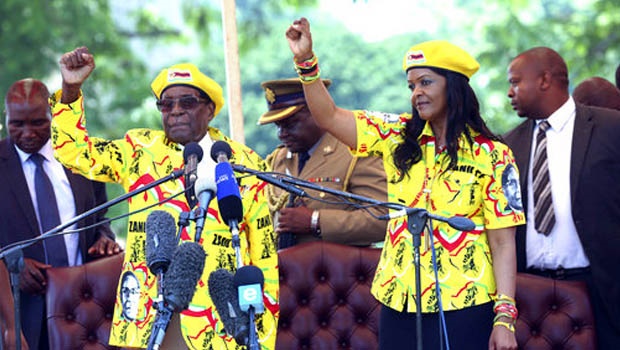 In a move that has left many surprised, all 10 provinces of the ruling Zanu-PF that had initially endorsed president Mugabe as the party candidate for the 2018 elections are now calling for his removal.

The march on Saturday is backed by the military, which said is a statement on Friday that its operation “remains solid” and Zimbabweans are urged to remain patient. 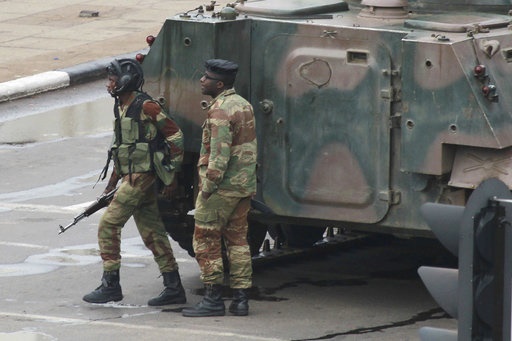 Mutsvangwa gave president Mugabe an ultimatum that he must resign by Saturday.

“Between now and tomorrow (on Saturday), we are giving a very strong warning to Mugabe and his wife… He won’t be allowed to continue,” he said Mutsvangwa.

Veterans of Zimbabwe’s independence war were loyal supporters of Mugabe, but they turned against him as friction grew between the president and the military.

The generals took over late on Tuesday after vice president Emmerson Mnangagwa was abruptly sacked and Mugabe’s wife Grace emerged in prime position to succeed her increasingly frail husband.

“We want to restore our pride and tomorrow is the day… we can finish the job which the army started.”

“There’s no going back about Mugabe. He must leave.” 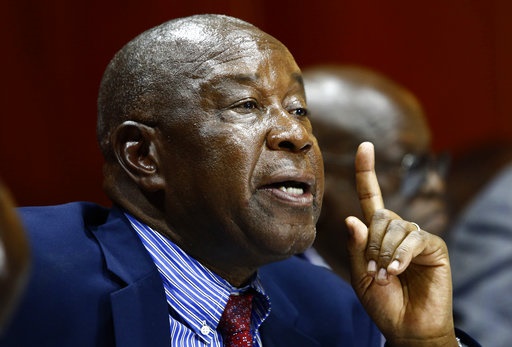 Zimbabweans are expected to converge in their big numbers on Saturday for a protest against President Robert Mugabe who has rule the country for 37 years.

War veterans leader Chris Mutsvangwa told a press conference in Harare on Friday that the “game was up” for Mugabe, 93, and his wife Grace, 52.

Mutsvangwa called for a huge turnout at street protests, appealing to all Zimbabwean business people and those in the diaspora to finance the peaceful march.