Zimbabwe President Robert Mugabe is facing growing calls for him to step down following ZANU-PF sacking him as its president. Follow the live updates.

South African and ANC delegates will be viewing events in Zimbabwe with some concern, explains Daniel Silke.

The MDC-T has unsuccessfully tried to impeach Robert Mugabe in the past, but now the ruling ZANU-PF has turned against him. – AP

ZANU-PF’s central committee had earlier named Emmerson Mnangagwa as its new leader. It was Mugabe’s sacking of Mnangagwa as his vice-president, to pave the way for his wife Grace to succeed him, that triggered the army’s intervention. – Reuters

The Power of the people is Greater than the people in power ?. Salute to the Zimbabweans people and its army #Zimbabwe #countryduty

The Central Committee of the ruling ZANU-PF party voted to dismiss Mugabe as party leader at a meeting earlier on Sunday and said impeachment proceedings would begin if he doesn’t resign as the country’s president by 12:00 on Monday.

Mugabe made no reference to the party moves against him, instead saying he would play a leading role in a party congress planned for December 12, 2017. – AP Following his rambling speech in which he refused to announce his resignation, the once-formidable Mugabe is now a virtually powerless, isolated figure, making his continued incumbency all the more unusual and extending Zimbabwe’s political limbo.

He is largely confined to his private home by the military, the ruling party has fired him from his leadership post and huge crowds poured into the streets of Harare, the capital, on Saturday to demand that he leave office. – AP Zimbabweans who gathered at a bar in the capital to celebrate longtime President Robert Mugabe’s expected announcement of his resignation say they are frustrated.

One named Nyasha says: “I would be happy for him despite everything he has done to leave with dignity and just walk away. … He is so stubborn.”

The ruling party’s Central Committee has told the world’s oldest head of state to resign by noon Monday or face impeachment. His speech on national television was expected to announce he would step down. ‘He is playing games,’ disappointed Zimbabweans say as Mugabe stays on

Matemadanda says: “He is playing games with the people of Zimbabwe.

He agrees to go and then plays games with us like that at the last minute.

“Mugabe’s address to the nation said he would preside over the ruling party’s congress next month, even though its Central Committee has recalled him as its leader and told him to resign as president by midday Monday or face impeachment. 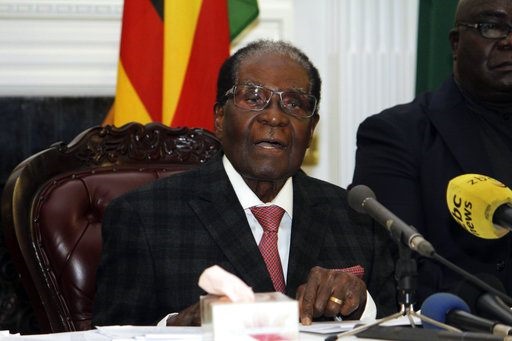 Watch this video in which army leaders are seen “switching” Robert Mugabe’s State of The Nation Speech. The video has gone viral on social media.
06:14

Zimbabwe’s state-run broadcaster says President Robert Mugabe “has not resigned”, confirming the baffled reactions of a nation that watched his mumbling address on TV.

Many Zimbabweans are outraged. “This dictator has absolutely no right to play ping pong with our people,” former Zimbabwe finance minister and activist Tendai Biti says on Twitter.

He adds on Twitter: “It beggars belief the generals did not know what was in Mugabe’s speech. ”

Zimbabwean watch in disbelief as Mugabe delivers his speech on Sunday. Zimbabwe’s war veterans association, which used to back President Robert Mugabe but now demands he quit, called on Sunday for protests after he made a TV address defying expectations he would resign.

“That speech has nothing to do with realities. We will go for impeachment and we are calling people back to the streets,” Chris Mutsvangwa, head of the influential association said.

It was not immediately clear from his remarks when and where the protests would take place. – AFP