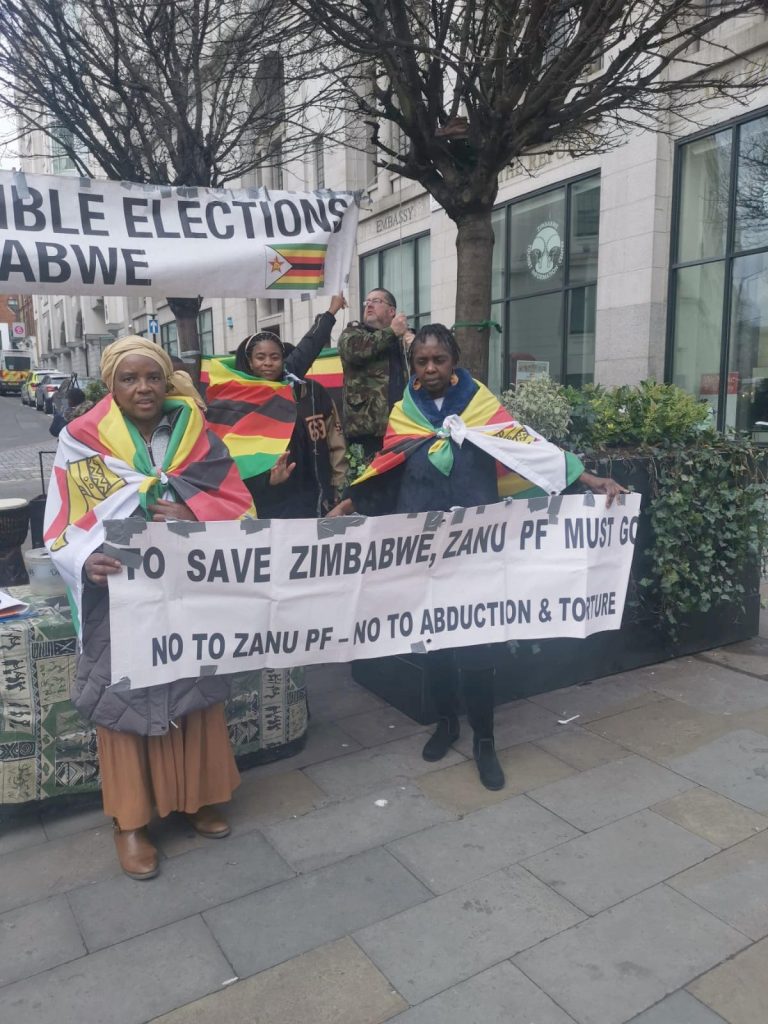 A valiant group braved coronavirus to hold the Vigil outside the Zimbabwe Embassy despite the UK gradually going into lockdown as the disease claims more victims.

Airliners are being grounded and large gatherings cancelled to reduce the chances of infection. People are urged to wash their hands frequently, not to shake hands and, indeed, keep a metre distance from others – difficult if crowded into a bus or train.

These precautions are being taken in countries with sophisticated health services. What will happen when the coronavirus hits Zimbabwe fills us with trepidation, given the state of its health service and the weakened immune system of so many malnourished people.

Whether this troubles the Zanu PF elite is open to doubt. After all, President Mnangagwa, instead of investing in hospitals, has wasted money on hiring three expensive public relations companies to campaign for the removal of US sanctions. The Americans have now extended them, including Owen Ncube, the security minister accused of ordering security services to abduct and mistreat members of the opposition.

The US Secretary of State, Mike Pompeo, urged the Zimbabwe government to ‘immediately end state-sponsored violence including against peaceful protesters, civil society, labour leaders and members of the opposition in Zimbabwe, and to investigate and hold accountable those responsible for human rights violations and abuse.’ (See: https://uk.reuters.com/article/uk-usa-zimbabwe-sanctions/u-s-blacklists-zimbabwe-officials-over-human-rights-abuse-idUKKBN20Y2D7).

To mark the 5th anniversary of the abduction of the human rights campaigner Itai Dzamara, the European Union has demanded action by the Zimbabwe government. The response was a bizarre statement by the police that investigations into the matter were continuing and that law enforcement agents had submitted ‘over 113 fortnightly updates to the High Court’! (See: https://www.herald.co.zw/police-submit-over-100-reports-on-dzamara/.)

An equally bizarre comment came from Zimbabwe’s Defence Minister Oppah Muchinguri who said coronavirus was the work of God punishing countries which imposed sanctions. She added: ‘They are now staying indoors. Their economies are screaming just like they did to our economy’. (see: https://www.enca.com/news/coronavirus-work-god-punishing-west-zimbabwe-minister.)