Zimbabwe wants to revert to using its own currency in place of the US dollar and the rand. 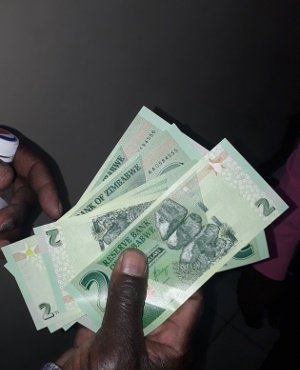 New bank notes and coins finally hit the streets of Zimbabwe on Tuesday after a false start the day before, with depositors forming long queues at banks and ATMs.

The new notes are part of President Emmerson Mnangagwa’s monetary reforms to have Zimbabwe revert to using its own currency in place of the US dollar and the rand. In June, Finance Minister Mthuli Ncube banned the usage of foreign currencies for the settlement of local transactions.

On Tuesday, depositors started withdrawing the new notes, in 5 and 2 Zimbabwean dollar denominations, as well as 2 dollar bond coins, from banks and cash machines. The new currency was supposed to be available on Monday but the introduction was delayed.

“We are overwhelmed today because people want the money to avoid paying premiums for their cash on the streets. I am not sure how much we will give out today but we are prepared for a busy day,” said a bank teller at a local finance institution in Harare.

By mid-morning depositors pushed and shoved each other in long queues at most of the banks in the capital. The new notes will circulate alongside and at a value equal to the quasi-currency bond notes of similar denominations introduced in 2016.

Barnabas Mbanga, 52, told Fin24 on Tuesday he managed to withdraw 300 Zimbabwean dollars from his bank account after two hours in a queue. He will use the money to pay for transport for him and his children who commute to school every day.

“I got some money but it’s not much because of the rising prices. I hope next week the banks will still have cash,” he said.

The central bank and other government officials are hoping that the new notes will help end perennial cash shortages in Zimbabwe. Because of the cash shortages, currency dealers and traders were now selling bond notes at a premium of 50%, whereby depositors and mobile wallet holders will only get half of their balances in cash.

Despite the introduction of the new notes and the number of people queuing up to withdraw the new money, some economists are skeptical the new currency will help solve Zimbabwe’s financial crisis.

Economist Steve Hanke of Johns Hopkins University in the US tweeted to say Zimbabwe will need to re-dollarize. “The only change to Zimbabwe’s new currency will be the removal of the words bond note. No one is fooled, Zimbabwe’s annual inflation rate is 513% per year. Zimbabwe must dollarize to crush inflation and ensure growth,” he tweeted on November 7.

Another economist, Vince Musewe, said on Tuesday that nothing much had changed.  “People seem very tense and angry of what they must go through to get a few [Zimbabwe dollars]. Little fights & skirmishes about nothing in the streets cause Zimbabweans are generally stressed. Life is generally brutish, stressful and unprofitable for most,” said Musewe.