And this could be pay back time

Source: Looks like you ignored advice out of greedy – The Zimbabwean 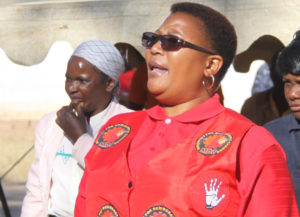 Dear Dr. Khupe, Dr. Komichi and Senator Mwonzora,I have seen notices from the MDC-T 2014 Matebelenand South and Harare Provincial leadership teams instructing people from their respective provinces not to attend the Extra-Ordinary Congress which was due to be held on 19 December 2020 because the due process as provided for in the MDC Constitution was not followed in conducting provincial elections for the Presidency.  These provinces are dead right, and I also read an admission of guilty circulated by Dr Komichi in which he wrote: “After exhaustive deliberations of the National Standing Committee the Extra-Ordinary Congress that should take place tomorrow, Saturday 19 December 2020 has been moved further to a date to be advised soon”. That was a brilliant statement, Dr Komichi, except that I am not sure which Standing Committee you were referring to, whether the MDC-T 2014 Standing Committee or the unconstitutional Standing Committee that was handpicked to organise the Extra-Ordinary Congress.

The real Extra-Ordinary Congress of the MDC-T ordered by the Supreme Court is only one that is called for by the appropriate MDC-T 2014 structures, and anything short of that is bogus and will be challenged in the courts. Already I have read an intention by someone in the MDC-T 2014 South Africa Province to take the bogus MDC-T leadership to the courts if they had unconstitutionally proceeded with the Congress, and that is a good warning that should not be taken lightly.

All the recalls from Parliament and local authorities by the bogus leadership, which were unfortunately endorsed by Parliament and Government are not in line with the Supreme Court judgement which recommended the holding of an Extra-Ordinary Congress. The simple mandate given to Dr Khupe, and if she failed to Dr Komichi by the Supreme Court was simply to call for an Extra-Ordinary Congress to replace the late Dr Richard Morgan Tsvangirai as President of the MDC-T, and nothing extra. The fact that a time limit was given meant that should that fail, the parties would continue the way they were operating until the Supreme Court ruling was announced.

If the Extra-Ordinary Congress that abides by the MDC Constitution and in the extended timeframe given by the Supreme Court, then all the recalled legislators and councillors must be reinstated to their positions, and it is very unfortunate that Parliament of Zimbabwe and Government of Zimbabwe took sides before the Supreme Court judgement to elect a replacement of the MDC-T  leader had been implemented.

Many people, myself included, have advised, advised and advised against the way the bogus Council and Standing Committee were handling things, and I even advised that the MDC was born out of the ZCTU, hence there was need to seek ZCTU mediation, and all my advice fell on deaf ears, only to read a statement from the ZCTU that someone in the bogus Standing Committee had falsely communicated that the ZCTU were to be supervising the election process on 19 December 2020.

Dr Komichi, Dr Khupe, Senator Mwonzora and all those you were working with in this failed project, accept you have failed to manage this, and resign in shame. Ask yourselves if you really deserve the respect of the people who have stood with the MDC since its formation.