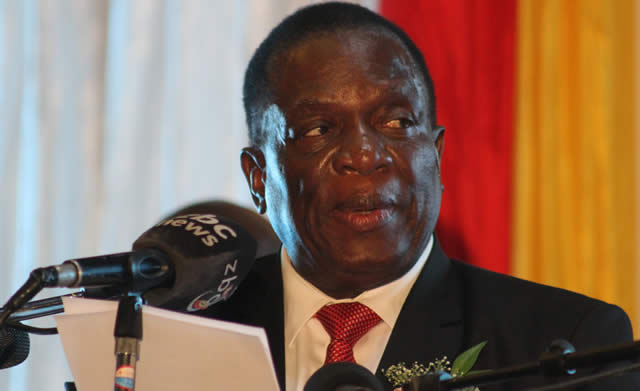 Tendai Mugabe in WINDHOEK, Namibia
Zimbabwe will never be the same again as Government is addressing all challenges facing the nation with renewed effort and vigour, President Mnangagwa has said.

Addressing Zimbabweans resident here after meeting his Namibian counterpart, President Hage Geingob on the third leg of his regional tour to apprise fellow Sadc leaders on developments in Zimbabwe that culminated in his ascension to the Presidency, Cde Mnangagwa revealed that his call for the return of externalised funds was being heeded and substantial millions had since been returned.

The President revealed that he had given all Cabinet ministers targets to meet within their first 100 days in office, and some opposition parties were already claiming that he had stolen their manifestos, saying as long as the ideas fell within the purview of the national interest, he was duty-bound to attend to them.

He explained amendments made to the Indigenisation and Economic Empowerment Act as well as the vast opportunities presented by the new dispensation across all sectors.

“My administration focuses on the following issues, one — unity, unity, unity. Love, love, love. Work, work and work. All Zimbabweans we get united under our national flag and national anthem. We accept that we may have different views about how to run the country and that again, we accept it. So, we don’t need violence at all whether with the family or the community or the country. If people differ, differ peacefully. It must be an intellectual difference in terms of approach. That should not be developed into violence. We must accept each other as sisters and brothers determined to develop our country. I think we have more than 27 opposition parties in the country but with my focused administration, I hardly see whether they will find ground left behind which I am not taking care of. I said so back home and the response is that, Cde Mnangagwa has taken over our various manifestos. No! My administration addresses the national interests of our country and where the ideas of any opposition party coincides with national interests, that I take on board and it becomes mine and not theirs. Secondly, as a party, which is Zanu-PF, we are determined to walk the talk.”

President Mnangagwa explained the opportunities available for investment in areas such as mining, agriculture, education, tourism and infrastructure development among others.

With regards to mining, the President said Government had removed the 51 percent local shareholding requirement and restricted that to diamonds and platinum only.

He said in the agriculture sector, Zimbabwe had managed to restore its breadbasket status after successfully implementing the Command Agriculture programme last year.

Said President Mnangagwa: “We have to look at our educational institutions. During our time, when we went to school a long time ago, we were educated in order to look for jobs to be a clerk or nurse or a driver but we are saying, our tertiary institutions should have curriculums that talk to the industry so that what industry requires, the institutions must produce products who can work in the industry meeting the requirements of the industry. There should be this inter-marriage between the needs of industry and the institutions producing graduates from our institutions. That time is now over where universities pride themselves for producing many graduates. They must produce graduates who can fit our economic times – the technology of today and not all of them should be products who look of employment. They must also be creators of employment.”

President Mnangagwa said Government had set aside a fund to assist young people keen to start businesses that create employment.