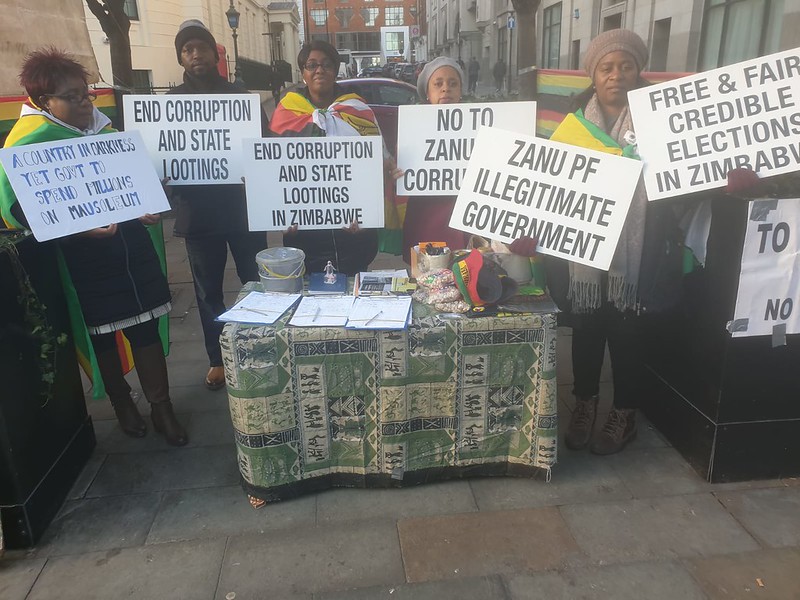 Dozens of African leaders are attending the UK-Africa Investment Summit hosted by Prime Minister Boris Johnson in London this week. It is bringing together businesses, governments and international institutions to ‘showcase and promote the breadth and quality of investment opportunities across Africa’.

The British government hopes the Summit ‘will mobilise new and substantial investment to create jobs and boost mutual prosperity’ – just what Zimbabwe needs.

The leaders of Africa’s economic power houses such as South Africa’s Ramaphosa, Nigeria’s Buhari and Kenya’s Kenyatta will be there, along with Egypt’s Sisi – but President Mnangagwa has not been invited.

His spokesman George Charamba snorted: ‘Methinks the UK uses false diplomacy to steady nerves arising from Brexit’. He continued in full rhetorical mode: ‘The UK is no longer an investing global power; it long ceased to be thus’.

Apparently playing one of Shakespeare’s fools, he further declaimed that the Commonwealth was ‘not a veritable economic grouping but just an emotional get-together’, completely forgetting the last scene in this play in which Zimbabwe declared that it wanted nothing more than to rejoin this apparently moribund old boys’ club.

The UK may perhaps be only the fifth or sixth biggest economy in the world but it aims to be the biggest G7 investor in Africa by 2022. Abracadabra Charamba should come clean on why Zimbabwe was not invited. The Vigil suggests it was because Zanu PF has not met its promises on reform, on dialogue, on tackling corruption . . .(see: https://www.zimlive.com/2020/01/14/zimbabwe-plays-down-snub-at-uk-africa-summit-claims-uk-economically-diminished/).

The Chinese can confirm this: Foreign Minister Wang Yi made it clear on his recent visit to Harare that China would finance infrastructural projects but would not give the government any budgetary support. The message was, according to the Zimbabwe Independent, that ‘Harare needed to roll out a comprehensive economic reform agenda and tackle rampant corruption’. (See: https://www.theindependent.co.zw/2020/01/17/no-bailout-china-tells-zim-govt/.)

This message was underlined by the EU Ambassador to Zimbabwe Timo Olkkonen, who said corruption and mismanagement of the agricultural sector were mainly responsible for food shortages. ‘Large areas are lying fallow’, he observed (see: https://www.newsday.co.zw/2020/01/corruption-fuels-zim-hunger/).

For its part, the African Development Bank complains that Zimbabwe is ‘very behind’ in clearing its $700 million arrears to the bank. The local manager in Zimbabwe said tactfully ‘maybe this is something that the government needs to improve on (see: https://www.businesslive.co.za/bd/world/africa/2020-01-12-zimbabwe-far-behind-in-repaying-debt-says-african-development-bank/)

What a good idea. But perhaps he hasn’t noticed that the government doesn’t believe in paying its bills. It has other ways of conducting business – as Vice President General Dr Chiwenga’s divorce case has revealed, unveiling a world of juju, witchcraft and spells (see: https://www.newsday.co.zw/2020/01/chiwenga-divorce-opens-can-of-worms/).

Watch out China. We gather you are given to this sort of thing yourselves . . .

FOR THE RECORD: 17 signed the register