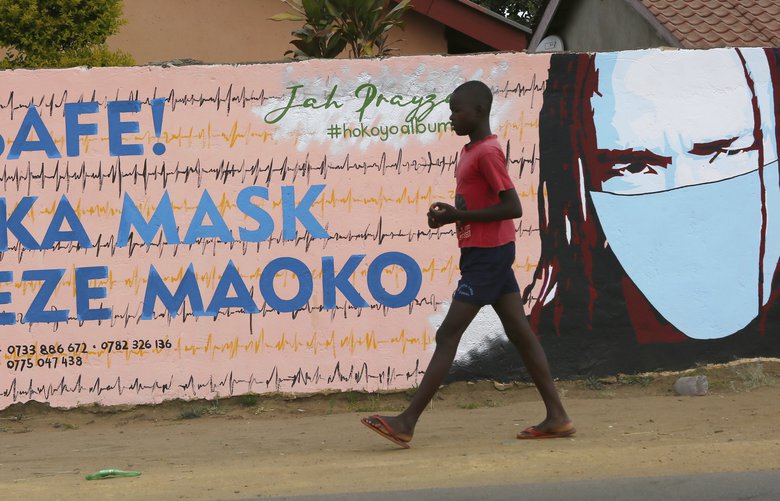 A young boy walks past a wall with graffiti urging people to wear face masks in Harare, Thursday, May, 28, 2020. Manhunts have… (AP Photo/Tsvangirayi Mukwazhi)

BLANTYRE, Malawi (AP) — Manhunts have begun after hundreds of people, some with the coronavirus, fled quarantine centers in Zimbabwe and Malawi while authorities worry they will spread COVID-19 in countries whose health systems can be rapidly overwhelmed.

At least 46 escapees had tested positive for the virus. Some of those who fled told reporters they had bribed police.

And in Zimbabwe, police spokesman Paul Nyathi said officers were “hunting down” more than 100 people who escaped from centers where a 21-day quarantine is mandatory for those returning from abroad.

“They escape and sneak into the villages … We are warning people to stop sheltering them. These escapees are becoming a serious danger to communities,” Nyathi said.

Nearly all of Zimbabwe’s 75 new cases this week came from the centers that hold hundreds of people who have returned, sometimes involuntarily, from neighboring South Africa and Botswana.

The quarantine centers have become “our source of danger,” Health Minister Obadiah Moyo told a special parliamentary committee this week.

Both Zimbabwe and Malawi have fewer than 200 confirmed cases but regional power South Africa, where many in both countries go to seek work, has more than 25,000. South Africa has the most cases in Africa, where the continent-wide total is nearly 125,000.

Zimbabwe’s government is also worried about people crossing porous borders and failing to report at quarantine centers. The information ministry has begun sharing a hotline number and asking people to stop harboring “border jumpers” and those who “abscond” from quarantine.

Malawi saw another mass escape earlier this week when 26 people left the Mwanza border post while waiting for test results. People arriving in the country face a mandatory 14-day quarantine.

The Blantyre district director of health and social services, Gift Kawalazira, said they were overwhelmed when more than 2,000 people turned up at the border post in Mwanza over the weekend. Holding some in the stadium was a last-minute resort after plans to use education facilities failed for lack of funds, he said.

“They will be moving around while trying to elude authorities,” he said of the escapees, including a smaller group that slipped away from a Blantyre center on Monday. Eight had tested positive for the virus.

“People need to understand that it is not punishment but we are only doing this to protect the general public,” Kawalazira said.

Few prevention measures could be seen at the stadium, with people leaving freely to buy food from nearby vendors. They told reporters they had received no food from authorities since Monday.

Relatives of some of the returnees entered the stadium to visit, giving loved ones hugs.