Rumbidzayi Zinyuke Manicaland Bureau
Government has launched a massive treatment programme for the victims of Cyclone Idai, with adequate medical supplies and medical personnel now in place to cater for the thousands affected mainly in Chimanimani and Chipinge districts of Manicaland.

Speaking at NatPharm warehouses in Mutare yesterday, Health and Child Care Minister Dr Obadiah Moyo said medical personal was already on the ground for the programme.

He said the medication that had been donated from Tanzania and the United Arab Emirates and other agencies had already been delivered and the Ministry was working tirelessly to ensure that it reached the disaster areas.

“We are happy that we have adequate stocks of medicines,” he said. “This is as a result of the top up which we have got from well-wishers and at the same time the contributions which have come from arrangements made by President Mnangagwa and his counterparts.

“We have received a consignment of medicines from Tanzania, as well as another from UAE. We are grateful for the efforts which His Excellency has put towards the people who were affected by Cyclone Idai.”

Minister Moyo said the Ministry had personnel on the ground to ensure that the injured were attended to immediately.

He said they were also prepared and ready to combat any communicable diseases that might arise in the affected areas.

“Kits have been prepared and ferried to affected areas,” said Minister Moyo. “We are happy that we have three helicopters that are transporting the medicines from Mutare to the affected areas.

“We have cholera kits from WHO, IV fluids, antibiotics, antiretroviral tablets, TB medication, diabetes, and hypertension medication. We also have some oral cholera vaccines left from the exercise we carried out, so if the need arises, we will administer the vaccine. We also have family planning and delivery kits for expecting mothers in place.”

Minister Moyo said UNICEF had also come in through the Water Sanitation and Hygiene (WASH) programme to help provide clean drinking water to the communities. 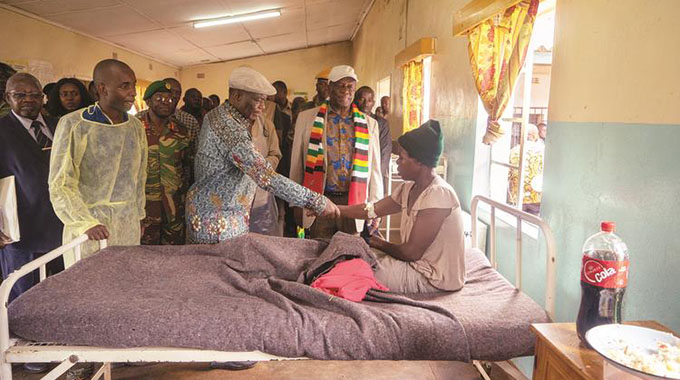 Manicaland provincial medical director Dr Patron Mafaune said the province received additional nurses and specialist doctors from other provinces to help beef up their personnel to deal with the disaster.

She said Mashonaland East was planning to send 25 nurses, while Mashonaland Central had sent eight nursing staff and others would be coming from the Zimbabwe Nurses Association (ZINA).

“We are working with multiple injuries, so they will require specialist attention, which is beyond the package of services that our district hospitals can offer,” she said. “Currently, we have received a team of eight specialists that were sent from Zimbabwe Medical Association Harare that comprised of surgeons and anaesthetists which arrived on Tuesday.

Dr Mafaune said since evacuation started, Chipinge District Hospital had 30 patients from the areas affected by Cyclone Idai and six patients were airlifted and sent to Mutambara Mission Hospital and another two were at Mutare Provincial Hospital.

“Unfortunately, the patients at Mutambara will require specialist attention which is not available there, and because of the effects of the cyclone, the mission hospital has been cut off since the major bridge, Umvumvumvu, which connects to the institution was destroyed,” she said.

Dr Mafaune said there were frantic efforts to send more medication to Mutambara and airlift the six patients there to Mutare.

“With the expertise that is there in the province, we have noted that at the moment we do not have patients that we need to be ferrying further, but we are still waiting for assessments for the patients that are at Chipinge hospital,” she said.

“The specialists that have gone there will indicate whether we need to move any patients from Chipinge to Mutare hospital or even further to Harare Central Hospital or Parirenyatwa Hospital.”