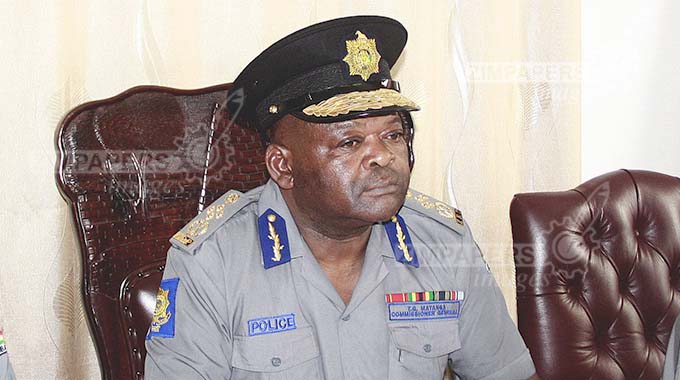 Bulawayo Bureau
Police Commissioner-General Godwin Matanga yesterday said two suspects were arrested here in connection with the White City Stadium terror attack at the beginning of an intense investigation to sniff out perpetrators of the heinous atrocity which killed two security operatives and injured 49 people.

On June 23, a grenade that was targeted at President Mnangagwa went off at the stadium, causing pandemonium.
The President escaped unhurt, but two aides to Vice Presidents Constantino Chiwenga and Kembo Mohadi sustained serious injuries and later died in hospital.

Addressing senior police officers during his first tour of Bulawayo Province since his appointment as the police boss, Comm-Gen Matanga said a joint investigative team would continue updating the nation on progress made in the bombing investigations.

He described the attempt on the President’s life as a “nefarious” and “horrendous” act, but assured the nation that the perpetrators would be brought to book as police would leave no stone unturned.

“As the Zimbabwe Republic Police, we will never rest until all those behind this heinous act have been accounted for and have had their day in court,” said Comm Gen Matanga. “We will do whatever it takes within the precincts of the law to ensure that this objective is met. At the risk of over emphasising, I wish to reiterate that no stone will be left unturned.

“To this end, I would like to applaud the level of cooperation and support that the joint investigation team has so far received, culminating in two suspects being accounted for. We really appreciate this collaborative effort and continue to appeal for more information which may enable us to bring to book whoever had a hand in this nefarious act beyond the two suspects we have nabbed.”

Comm Gen Matanga said they were closing in on those behind the assassination attempt.
“To the perpetrators of this callous act I say be warned that we will certainly sniff you out from wherever you are hiding and you shall face the full wrath of the law,” said Comm Gen Matanga.

“As a province, we would like to assure you that we will leave no stone unturned to account for the assassins,” said Snr Asst Comm Ncube.

He said the province was fully behind the new dispensation and through police services, they will create an environment attractive for investors.

Among those injured in the attempt to assassinate President Mnangagwa were Vice Presidents Chiwenga and Mohadi, Zanu-PF national chairperson, Cde Oppah Muchinguri-Kashiri and national commissar, Cde Engelbert Rugeje.
President Mnangagwa described the bomb blast as an act of cowardice and it has been condemned globally.

Zanu-PF has said the terror attack is “Satanic.”
Meanwhile, Comm Gen Matanga has said law enforcement agents are receiving training on electoral laws so that they employ high levels of professionalism on elections.

He lauded various arms of Government for preaching peace ahead of the July 30 elections.
“As the ZRP, we heartily applaud the Government’s stance on zero tolerance to political violence and tirelessly preaching the need for the country to hold free, fair, credible and transparent elections,” said Comm Gen Matanga.

“By equal measure, we also express our profound gratitude to the National Peace and Reconciliation Commission (NPRC) for their apparent effort towards promoting national peace by facilitating the presidential candidates to commit themselves and their respective political parties to a peaceful campaign ahead of the plebiscite through the signing of a high level peace pledge.”