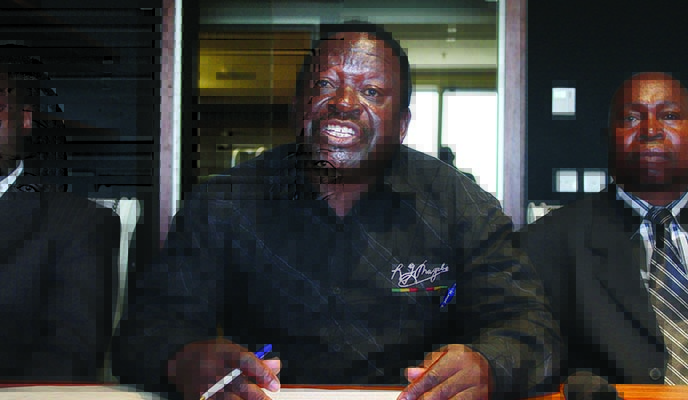 ZANU PF political commissar Victor Matemadanda has claimed that the statement he made at the party’s annual conference last December where he was quoted as saying “if elections fail, we will use any other means necessary” to retain power was not an incitement to commit public violence.

Instead, Matemadanda claims he meant that the ruling party was prepared to form a transitional government in the event that elections failed to deliver a clear result.

In his answering affidavit filed at the High Court in Harare after being taken to court by the Electoral Resource Centre (ERC) for contravening the Electoral Act, Matemadanda said his remarks were not meant to demean public elections.

“The statement that is the basis of this application, if interpreted by a reasonable person, is by no means a threat of violence. Clearly, I stated that “if elections fail”, which is a real possibility in any society, then other means necessary would be employed. However, this does not mean that I do not believe in elections for that would make my position as the political commissar redundant, given that my main task is to mobilise and campaign for the support of the electorate,” Matemadanda submitted.

He claimed that he meant that Zanu PF could engage in a power-sharing deal with the opposition if elections were to fail.

“I meant any means necessary within the confines of the law. These means may include dialogue, litigation, transitional government or the tried and tested government of national unity. It is, therefore, surprising how the applicant has interpreted the statement ‘any means necessary’ as a synonym of violence, which is wrong and this honourable court should dismiss it as such,” Matemadanda said in his defence.

The Zimbabwe Electoral Commission (Zec) fought in Matemadanda’s corner, saying the matter should be dismissed on a technicality.

In her opposing affidavit, Zec chairperson Justice Priscilla Chigumba said ERC was not a voter and, therefore, did not have the right to bring the matter before the courts.

“The applicant has no locus standi to approach the court for the relief sought in this matter. The issue pursued by the applicant, that of intimidation of voters, is a matter that speaks to and ought to be pursued by individual voters who, in consequence of the words attributed to Matemadanda, have suffered intimidation as defined by the Electoral Act,” she submitted.

Further she noted that Zec had referred the matter for investigation to the police and any order coming from the court would be subject to interference with the operations of the independent body.

ERC said the statement made by Matemadanda should never be taken lightly as the country had had violent elections in the past.

The electoral watchdog cited the violent manner in which Zanu PF refused to cede power after being defeated by the opposition MDC-T in 2008.

“His (Matemadanda) utterances cannot be taken lightly. They carry the force of authority and directive to members of the ruling party, war veterans and those that fall under his ministerial authority. They are grossly reckless, inflammatory and constitute a threat of voter intimidation. In our view, the efforts by deputy minister Matemadanda constitute an act of acceptance that politicians are accountable to the people of Zimbabwe for their words and actions. The court action was not a declaration of war on him but simply an act of citizen responsibility and public interest. ERC is a juristic citizen of Zimbabwe and it has a right to seek political accountability from politicians, the objective of the action has been achieved,” ERC said.