The Mayoral Mansion in Gunhill which was built by former Harare Mayor, Solomon Tavengwa from 1999–2000 has become a white elephant. Construction of the manor which gobbled approximately Z$50 million (US$500,000) of taxpayers money. – Picture: Believe Nyakudjara

The gigantic mayoral mansion built by Harare City Council in Gun Hill for more than US$500 000 as the grand luxury residence for the now-defunct executive mayors is a white elephant gradually rotting under a regime of minimal maintenance and of no practical use for the city council, which still refuses to sell it off.

Yesterday a visit found most rooms empty, a few used as offices and, incongruously, the headquarters of the council’s football club.

The mansion was built just over 20 years ago despite numerous objections by ratepayers. The rationale was that the mayoralty should not be limited to those wealthy enough to afford a decent house. But even then, those who accepted the concept reckoned what was actually needed was the standard three-bedroomed middle-income house with a second lounge and a study so the mayor could see visitors at home.

Instead there is a mansion which has six bedrooms on the first floor, an airy functions area, an industrial-size kitchen, a family kitchen, two colossal lounges, a dining room, an outlandish mayor’s suite on the ground floor, a powder room, large cloakroom, several lobbies and a luxurious bar.

It is now a shadow of its intended glory, with the extensive grounds dominated by weeds and uncut grass.

At the security office at the main gate the visitor sees a sign of what is happening. A broken window is boarded up with a cardboard box.

The “cottage” in the backyard that was meant to be staff quarters, and which many reckoned by itself was suitable as a mayor’s house if one was needed, is now being used by personnel who should taking care of the mansion but are literally doing nothing.

In spite of these luxurious specs, including expensive curtains and furniture, only two individuals have lived in the house since the construction of the mansion that is being underused, considering the huge amount of money that was put into the project.

These are former mayor Engineer Elias Mudzuri (2002–2003) who once occupied the cottage and former Harare Commission chairperson Sekesai Makwavarara, (2006–2008) who had a stint in the mansion itself. 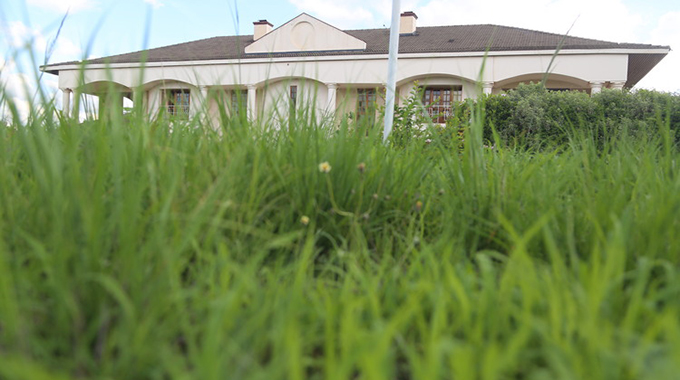 The Mayoral Mansion in Gunhill which was built by former Harare Mayor, Solomon Tavengwa from 1999–2000 has become a white elephant. Construction of the manor which gobbled approximately Z$50 million (US$500,000) of taxpayers money. – Picture: Believe Nyakudjara

“The house is home to council’s business unit Sunshine Holdings and football club Harare City. It also houses council employees and some council functions are held there. The decision not to use the house is saving us thousands in rentals,” he said.

Contacted yesterday Harare Mayor Jacob Mafume interestingly said using the house was costly. “There are a lot of things needed for me to use the house. A lot of furniture has to be bought to bring the house up to standard. Our priority is service delivery, but the good thing is that we are using it to house offices of some our departments,” he said.

Many have suggested over the years that the council should admit its error, recognise that it was a bad investment and get rid of it either to some business mogul who wanted a mansion or more probably to one of those private businesses that, with extra suitable investment, would convert it into the private boutique hotel and seminar centre, similar to several that are operating in the north-eastern suburbs.

Back then, Esther Chimanikire, who is the lobby and advocacy officer for the Harare Residents Trust (HRT), has said that it was better for council to sell or rent out the mansion, as it was not generating income equivalent to the resources that were used for its construction.

“It is another case of misappropriation of public funds. Residents lost out when that mansion was constructed because the money that was used was supposed to be channelled towards service delivery. There is need for a valuation of the mansion so that residents know its actual value,” said Chimanikire.