Mazibisa: A man on a mission

NKOSANA George Mazibisa is a young man on a mission. While his age mates are looking for employment, he has already set up a company and is creating jobs. 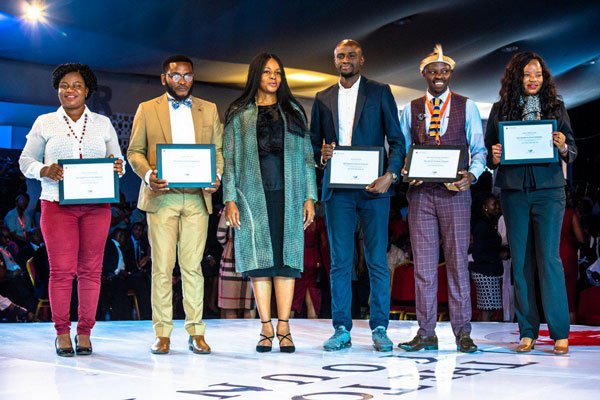 Nkosana George Mazibisa second from right was honoured with the most impactful award in Lagos, Nigeria last week by Awele Vivian Elumelu (third from left) wife to billionaire Tony Elumelu alongside five other African entrepreneurs.

After resigning from his job in 2013, Mazibisa has not looked back. He put together his savings and ventured into business, starting a company called Mazibisa Inc, which has interests in retail and manufacturing.

His business got a major boost when he was selected for the Tony Elumelu Foundation (TEF) programme which seeks to empower African entrepreneurs across the continent with a $5 000 non-refundable seed grant and mentorship.

“When I was selected, the TEF was in its second year. So out of 45 000 applicants, I managed to be in the Top 1 000. I went through  a six-month mentorship programme with a mentor from Malawi. He would give me tasks which are hands-on and tailor-made for business success. I got knowledge about market intelligence and how to survive in a difficult environment. So for six months I was under his mentorship,” he said.

The 29-year-old believes it was the mentorship and experience that enabled him to start a new line of business specialising in biscuit and potato crisp manufacturing.

“After the programme, I started another company called Swaad Taste of India, a biscuit and potato crisp manufacturing entity. After realising that most potato crisps in shops were coming from South Africa, I saw the opportunity and started my own crisps production. So from that journey and experience from TEF, I managed to expand my business,” Mazibisa said.

He said the current production capacity was 640 cases per month, with the product mostly found in retail shops in Bulawayo. His two companies have a staff complement of 20 people.

Apart from being part of TEF, Mazibisa said he was also selected for the Nelson Mandela Washington Fellowship in America.

“TEF provided me with the seed capital, whereas the Mandela Fellowship provided the experience. I combined both. One of the key takeaways or lessons that I learnt from TEF and Mandela Fellowship is that for our businesses to strive, we need to be eco-friendly. Remember we have El Nino in Zimbabwe. So the survival of agribusiness must be hinged on climate adaptation,” he said.

“What it means is that we train all 188 schools in Bulawayo. We facilitate the construction of the greenhouse such that when they produce potatoes, we look for a market.”

He said the greenhouse pilot project he launched at Mawaba primary school in Bulawayo was successful and attracted the attention of the former United States ambassador to Zimbabwe, Harry Thomas.

Apart from the ambassador, the European Union mission in Zimbabwe also toured the project in July this year.

Mazibisa’s project was last week honoured with the most impactful award in Lagos, Nigeria, at the TEF forum, arguably the biggest gathering of entrepreneurs in Africa by billionaire Tony Elumelu.

Founded in 2015 by Elumelu, TEF is a 10-year programme with a  $100 million commitment to identify, train, mentor and fund 10 000 entrepreneurs for the economic development of Africa.

The TEF goal is to invest in businesses that will generate at least 1 million new jobs and contribute at least $10 billion in new annual revenues across Africa.