Today, our beloved continent celebrates Africa Day as the Movement for Democratic Change, itself a political behemoth on the continent, holds its 5th Congress under the theme: Defining a new course for Zimbabwe. 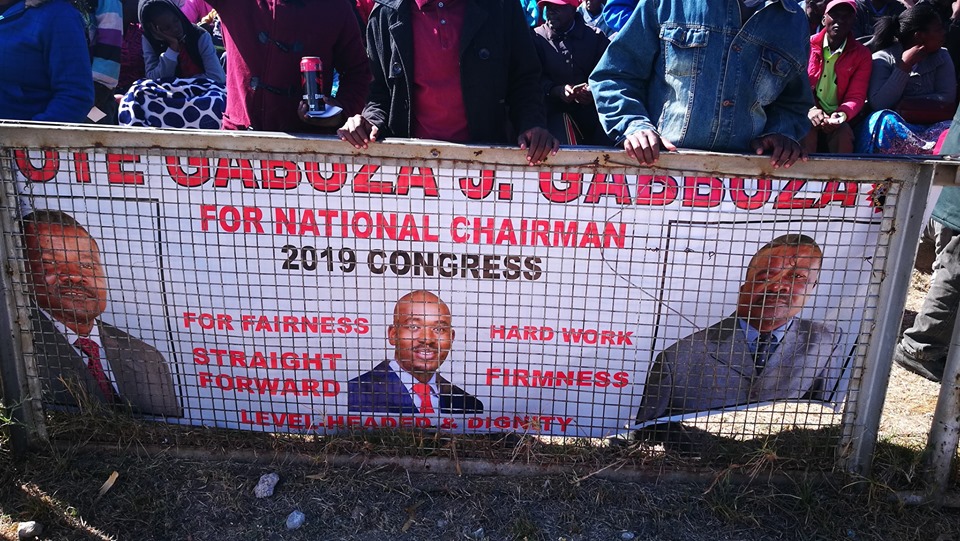 It is always cold here in Gweru but the democracy currently unraveling in this cold Midlands city is warm enough to de-scarf the nation’s chequered politics.

The contestation for positions has reached fever pitch here as candidates jostle to capture the hearts and minds of the electorate. Yet for us, the bigger issue is not the positions but the propositions that will emerge from this Congress.

Yes, this Congress is largely set to be a festival of ideas.

The candidates are set for last ditch campaign efforts. They will parade themselves here in Gweru one after the other to make their case before the delegates from the remaining provinces of Mashonaland West, Manicaland and Masvingo. The other provinces caucuses were held the respective provinces prior to the main Congress here. The “beauty contests”, as they are referred to within the MDC circles is a reference to the beauty of the ideas and propositions that the various candidates are proffering to make the case of their electability.

The beauty contests are contests of ideas and the candidates are being given a chance to openly, freely and democratically convince the delegates about how they will execute their respective mandates.

In what has been a first in Zimbabwe’s politics, all candidates vying for the same post have been afforded time to pitch their propositions and programmes to the provinces in an open forum. In this whole Congress from the branches upwards, we have seen true democracy at play. Even the President’s position was open to contestation; only that Advocate Nelson Chamisa was nominated by all the 13 provinces, meaning his position will no longer be contested. But everyone had a chance to stand against him if they were nominated by the provinces.

In the MDC, personal ambition for a position is not enough. You are deployed by the people through a nomination. You do not self-deploy, or get deployed by a Court to lead the party. Such is the people-centred politics that runs through political parties and movements that are truly democratic.

It appears there has been consensus within the party that Chamisa gets a fresh mandate as his tenure has sonorously exuded vibrancy since he took the mantle from the party’s late icon, Dr. Morgan Richard Tsvangirai.

Chamisa is a vibrant testament of the demographic reality of our beloved continent where the youth now constitute more than 60 percent of Africa’s population. It was because of this actuality that the Africa Day theme for 2017 was “Harnessing the Demographic through Investments in the Youth.

And the MDC has already invested in this generation by entrusting it with national leadership. In his wisdom, the iconic Morgan Tsvangirai appointed Advocate Nelson Chamisa as one of his deputies in August 2016. Addressing the party’s National Council, the party’s supreme decision-making body between Congresses, on 3 August 2016, President Tsvangirai explained why Chamisa, one of the founder members of the party, had been his choice for appointment.

“I took into consideration the fact that my visits across the country have revealed that the party has lost young voters, whether consciously or unconsciously. I had to respond to that key constituency which now constitutes about 60 percent of the country’s voting population. I had to project the MDC as a modern, 21st century political party in which the youth are not the leaders of tomorrow but are the leaders of today.”

I know that Tsvangirai’s spirit will now rest in peace because he personally told me of his succession preference. I can restate without equivocation that this Congress has just affirmed, through a democratic process, the doyen of democracy’s choice for President after his demise.

My only word of caution to the party faithful is that this party has never been about personalities but values and propositions. While loyalty to our leaders is important, we must ascribe more reverence to the party and its sacred values.

Thought is endemic in the MDC as is evidenced by the abundance of talent and the spread of competences at all levels of the party. Some may not know that the span of the party’s talent is well beyond lawyers and lawyer-ship. The MDC is a political behemoth bristling with flair and capacity from culturally-rich Binga in the Zambezi escarpment to Rushinga, well beyond the narrow precincts of Gutu where the people’s President hails from.

At this Congress, we are affirming and electing a leadership that confirms the MDC as a thriving political factory of ideas, thought, ingenuity, deftness, creativity and innovation.

This Congress has also been an eye-opener in terms of the extent to which ordinary party members and their leadership can go in defending the people’s project. The twin values of service and sacrifice have been showcased in a big way as delegates sacrificed their small savings and their assets to fund this Congress. The people’s project was under siege and the people themselves have stood firm in defending this sacred repository of their collective aspiration.

In this cold city of Gweru, we are witnessing true democracy at play, with the delegates openly mingling and interacting regardless of their different choices of those to be deployed into the party’s national leadership. The huge crowd here, kaleidoscopically emblazoned in diverse apparels with our distinct totemic red colour, is testimony that this is indeed a people’s party.

At play here in Gweru is true democracy that melts away the murderous politics that has brought this country down to its knees.

The people of Zimbabwe have chosen this Congress to de-scarf our politics and to usher democratically-elected deployees into the searing cockpit furnace that demands thought, leadership and delivery. From this congress, the fight-arena has been infested with a thought leadership endowed with the craft competence and deftness of mind that will overwhelm the militarized shenanigans of this scarfed lot that brazenly pick-pocketed the people’s vote.

This is a propositional and not a positional Congress and seven thematic committees are currently engaged in rigorous debate after which they will table before the Congress plenary the outcome of their robust deliberations.

Guiding the deliberations currently underway is the input from ordinary Zimbabweans into the relevant thematic areas that was gathered in an involving nationwide consultation process that has been taking place in the last three months.

Finally, as we leave this Congress venue tomorrow, the delegates are putting this scarfed regime on notice.

Anytime in the not-so-distant future, Zimbabweans shall be duly exercising their democratic right enshrined in the national Constitution to express their displeasure at the challenging hardships spawned by the gross mismanagement of the country’s economy.

The last time this regime nocturnally raised the price fuel, which triggers price hikes elsewhere in the economy, Zimbabweans went into the streets. And developments this past week show that the regime has just incentivized and invited Zimbabweans to occupy the streets once again.

Indeed, the people will heed the regime’s frantic invitation for action and the timing, nature, form and substance of the citizens’ confrontation with the authors of their plight will be revealed at the appropriate time.

The monthly token salary of the average Zimbabwean, for those still receiving wages, can barely buy 40 litres of fuel on the very rare occasions that the fuel is available while whole families are surviving on less than one dollar a day.

With the party leadership that will come out of this Congress, Zimbabweans should have a legitimate reason to hope again!

Ascot Racecourse, located in East Berkshire, England, is one of the famous horse-racing venues in the world. Fresh from our 5th Congress at our own Ascot Stadium in here Gweru, the dynamic and vibrant horses in the name of our unsullied, freshly-minted leadership can only gallop this nation to the commanding heights of opportunity, prosperity and hope.

Luke Tamborinyoka is the Director of Communications in the MDC. He writes here in his personal capacity. You can interact with him on facebook or on the twitter handle @luke_tambo