HARARE – Principals of the MDC Alliance have thrown their full weight
behind MDC leader Morgan Tsvangirai despite his ill-health. 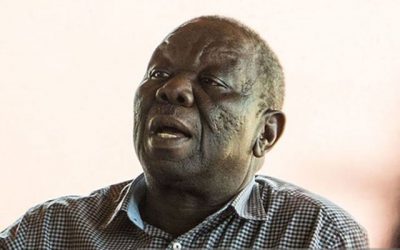 Tsvangirai has openly disclosed that he has cancer of the colon and has
been undergoing treatment in neighboring South Africa.

Last month, he was airlifted to South Africa after he had fallen
critically ill, spending almost a month hospitalised before returning to
Zimbabwe early October.

On Wednesday last week, he was again flown to a South African hospital.

Tsvangirai’s aide Eddie Cross has said the former prime minister was in
excruciating pain, raising concern over his fitness to lead a coalition
ahead of the make or break elections.

Tsvangirai’s spokesperson Luke Tamborinyoka said yesterday Cross has
neither the mandate nor the medical expertise to purport to speak
authoritatively and competently about Tsvangirai’s health.

“Those of us who have been in constant interaction with the president are
worried stiff about the needless and unnecessary innuendos that are being
thrown around concerning his health,” Tamborinyoka said.

“There is absolutely no reason for anyone, let alone a senior member of
the party, citing nameless and ill-informed third parties, to trigger a
national alarm not based on objective facts.

“True, like all mortal beings, MT is winding up his health issues and is
currently on a short break but he is well out of danger and will be back
home soon. I have just spoken to him and he is in fine health. Yes, we are
unrepentant democrats; but certainly, indiscipline does not constitute
democracy.”

MDC Alliance spokesperson Welshman Ncube said they still have faith in
Tsvangirai and he still remained the opposition’s best foot forward in the
2018 polls.

“We have consistently said that president Tsvangirai is our candidate. All
the seven parties signed that he was and will be our candidate. And when
we signed the agreement, we were all aware of the health situation and the
treatment that he is going through,” Ncube told the Daily News yesterday.

“So there is nothing at all that has changed. We are still praying for him
to get well soon and hope that he will be back in the trenches as soon as
possible. We would want him to rest and recuperate and get back to full
fitness.”

“Why is that question being asked against Tsvangirai who is 65 and not
Mugabe who is 93? It’s a foolish question. Why are people trying to play
God? Don’t give manure to rubbish. We are an alliance and we are forging
ahead,” Biti said.