The Zimbabwe Peace Project (ZPP) condemns the intraparty violence that has characterised the preparations for the Movement for Democratic Change (MDC) elective congress scheduled for May 2019. ZPP has received reports of violence which have rocked the party ahead of the Congress. 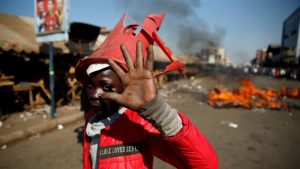 On Saturday 30 March 2019 MDC supporters convened at Councillor Magadzire’s homestead in ward 16, Unit J Chitungwiza for a district election process for candidates who would contest at the elective congress. Chitungwiza Provincial MDC Youth Chairperson Jabulani Mthunzi who is also Zengeza East ward 15 Councillor clashed with Zengeza East Legislator, Goodrich Chimbaira on the procedure of the elections. This resulted in violent skirmishes in which Mthunzi was assaulted by party youths affiliated to Chimbaira and was hit by Chimbaira’s vehicle. He was rushed to a hospital for treatment. The attack on Mthunzi violated his political rights and the right to personal security. Similar clashes were also reported during MDC district meetings in Highfields, Dzivarasekwa and Warren Park.In early March, ZPP recorded violent clashes between youths affiliated to the MDC Secretary General Douglas Mwonzora and those affiliated to the party president Advocate Nelson Chamisa during ward elections in Chitungwiza. As a result of these clashes, some ward and district elections were postponed.

This violent behaviour is not new as the party has experienced episodes of violence during its primary elections in the run up to the 2018 harmonised elections. At the funeral of the late MDC-T president, Morgan Richard Tsvangirai, the then vice president Thokozani Khupe and Secretary General were attacked by party youths and had to seek refuge in a hut; which the youths threatened to torch.

ZPP is concerned by the continued violent trajectory by the MDC. The organisation condemns all forms of political violence and political intolerance which compromises sustainable peace in Zimbabwe. ZPP believes that the party leadership can be instrumental in putting this deplorable behaviour to an end and ensure perpetrators are brought to book. ZPP calls upon all political parties to rein in their supporters to promote peace, tolerance and respect of human rights.

The Constitution of Zimbabwe in Section 67 (1b) gives every Zimbabwean citizen the right to make political choices freely. The MDC must allow its supporters to freely make their choices as they prepare for the elective congress.