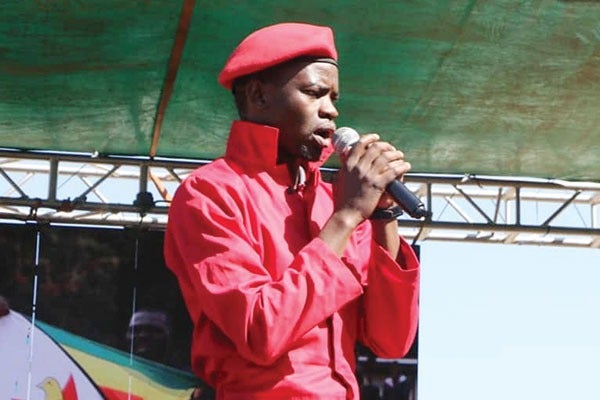 The opposition MDC has resolved to ambush the police and State agenacies by engaging in flash demonstrations at different locations at the same time in an effort to circumvent prohibition orders.

Party youth leader Obey Sithole (pictured) and Harare provincial chairperson Wellington Chikombo, speaking on the sidelines of preparations of the MDC 20th anniversary in Harare yesterday, vowed to sustain demonstrations against President Emmerson Mnangagwa’s government until a political settlement is reached.
“They have stopped demonstrations when we notify them, but they cannot stop us when we want to demonstrate. After August 16, if you have been following, we had a demonstration that we conducted and we went to Parliament over the abductions,” Sithole said.

“We also staged a demonstration at Parirenyatwa Hospital. We have simply resolved to have a change of strategy. Whenever we want to demonstrate, they have said you cannot continue, now we won’t be notifying them.”

The party’s youth wing, which has led from the front in previous demonstrations, said they would not be deterred by arrests, but will use the celebrations marked for Rufaro Stadium this Saturday to galvanise their support base for resistance against the government.

“People have to understand the deference between violence and resistance. What I have always advocated is resistance. It is every person’s right to resist any form of oppression and repression. So this is what I have been saying,” Sithole said.

“Resist this intolerable culture of abducting people, of creating joblessness, a culture of eliminating education and health among the citizens for crying out loud. These are fundamental human rights. We cannot be conformist, we cannot conform to illegitimacy. We will continue to resist an illegitimate government and that is not violence in any way.”

Backing the calls for demonstrations, Chikombo said the MDC faithful will defend democracy, the Constitution and their rights against the Zanu PF government with the last drop of their blood.

“We are not going to allow the devil to continue running away with the Bible from the pulpit as we have witnessed in the past.”
He said past demonstrations have not been in vain as they have brought in some semblance of democratic progression, but more pressure was needed to ensure ultimate freedom is achieved.

“We got to where we are because of pressure on this government. This government was not considering anything that is progressive. It is a process; Rome was not built in a day. We are going to complete this change. Just be patient with us, but we can assure you change is coming. We are going to continue piling pressure until we get a credible mediator,” he said.

Mnangagwa recently warned that his government will not tolerate lawlessness.

MDC leader Nelson Chamisa has snubbed the dialogue process initiated by Mnangagwa, demanding a one-on-one with the Zanu PF leader to resolve the legitimacy question.

Chamisa has also demanded that genuine dialogue should be mediated by a neutral convener.

Meanwhile, party secretary-general Charlton Hwende said the Saturday anniversary would be the biggest in the party’s history.

“This is a 45 000-capacity stadium and we are expecting 50 000. We have made arrangements for outside screens for the overflow because we are expecting a lot of people to come and celebrate 20 years of MDC existence,” Hwende said.

“We have also invited a number of friends from the region. We are expecting a delegation from Namibia, then we are also expecting some friends from South Africa, Zambia and other countries.”

MDC, facing financial challenges amid a melting economy, said it will rely on its membership to fill Rufaro Stadium, the venue of celebrations to mark the birth of the opposition party in September of 1999.

“MDC is a big party. We have a lot of membership who we rely on for financial support. For occasions as big as this one, they have come through and helped the party to host this anniversary,” Hwende said.

“It is funded by its own members. The members understand the significance of 20 years in existence and our provinces have contributed to the successful hosting of this conference. So as far as the anniversary is concerned, we have no financial challenges.”

The anniversary was initially pencilled for early this month, but was postponed in honour of the late former President Robert Mugabe who died in Singapore on September 6.