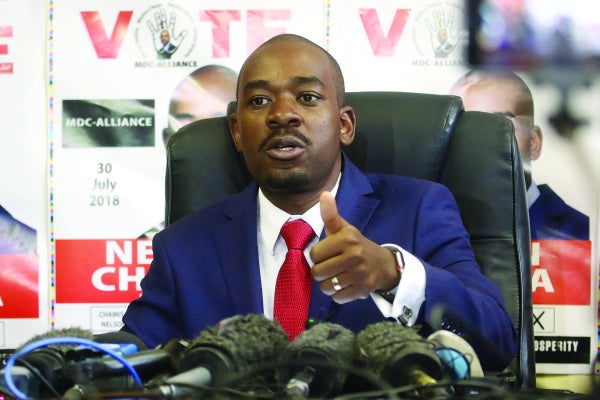 This came after police on Monday shut down the party’s headquarters in the wake of the discovery of 210 riot police and 41 municipal police helmets in a basement of a city building.
However, the opposition party accused police of deliberately planting the riot police gear to justify a crackdown on government critics.

Early Monday morning, armed police cordoned off the building and Robinson House, where the helmets were allegedly recovered on Saturday afternoon, forcing the MDC workers and several tenants to abandon their offices.

The police linked the helmets to possible criminal activities.

But it later turned out that the helmets had been sold by the police through ABC Auctions to businessman Mitchel Chibwe, who was questioned in the company of his lawyer Kudzai Rangarirai.

NewsDay understands police also demanded that Chibwe produce the receipts of the helmets which were never reported stolen or missing from police vaults.

MDC secretary-general Chalton Hwende deposed to an affidavit which forms part of the application urging the court to intervene and protect the interest of the opposition party together with its employees and tenants by granting an interdict against the country’s law enforcement agents.

“This is an urgent chambers application for an interdict, stopping respondents (Mathema, Matanga and the Officer Commanding) and anyone acting through them, directly or indirectly from barricading applicant’s (MDC) premises at number 44 Nelson Mandela Avenue, interrogating and intimidating applicant’s employees, visitors and tenants as well as interfering with applicant’s business at the premises,” Hwende said.

He said the presence of the police and their actions had adversely impacted on the day-to-day running of the party’s business as well as a private business, being a hair salon which is housed at the same building.

Hwende further said he was challenging the police to take them to court if they committed an offence, adding the law enforcement agents must also take them to a police station because they now fear for their lives due to the presence of the suspicious police officers at the building. The matter is pending.

Meanwhile, the MDC has alleged an attempt to use State apparatus to destabilise the opposition party, which includes blocking its meetings, planting fake evidence in an effort to justify a crackdown and arrest of its leaders.

In a letter to Matanga, Hwende said the MDC was worried by the constitutional violations by the police, who looked bent at undermining the opposition by effectively putting them under lock down.

“We write to bring to your attention and seek an explanation concerning the unlawful prohibition of our internal party meetings by members of the Zimbabwe Republic Police,” part of the letter to Matanga reads.

Hwende requested a meeting with Matanga and his team over the constitutional violations, which saw all party activities being banned in nine provinces and police camping at the party headquarters.

In a response dated October 11, Matanga avoided answering to the allegations levelled against the police a month ago and also putting the meeting request on ice, saying the MDC should write to the Home Affairs minister for permission to meet him over the opposition concerns.

“Reference is made to your correspondence of September 26, in which you were requesting for a meeting with the Zimbabwe Republic Police. You are being advised to submit your request through our parent ministry, the Ministry of Home Affairs and Cultural Heritage, as dictated by protocol,” he wrote.

The response came as police and the MDC are currently in a stand-off over allegations that party youths have declared the Morgan Richard Tsvangirai House a no-go area for the law enforcement agents.