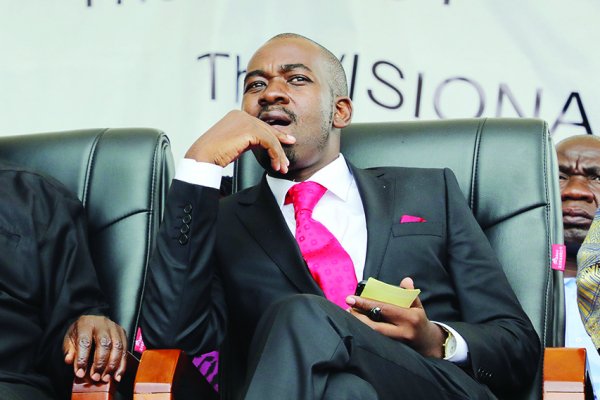 THE young man questioned power and authority from a tender age. He was conscious of his rights, yet he was not rebellious. He understood and used freedom of expression even during his high school days. He was simply in his own class when it came to knitting words.

Teachers realised this talent and dumped the assembly duties on his lap. He took the role with aplomb and fellow students enjoyed his adumbrating week-in week-out.

He came, saw and conquered. In 1991, Nelson Chamisa arrived at Alheit High School (Chingombe 2) just like any other ordinary pupil carrying a big trunk.

Wearing a schoolboy’s pair of shoes, navy blue shorts and a light blue shirt, there was nothing obviously extraordinary about him.

He was grouped in a class of the best pupils and his brilliance was quickly noticed by the then headmaster, Thomas Makanyire, who has now retired to Gutu, 228km south of Harare.

Trying to locate Makanyire was not an easy task, as he had transferred from Alheit High school in 1996 and last seen Chamisa in 1994, the year he sat for his Ordinary Level examinations.

Makanyire described Chamisa as a young man who knew how to conduct himself and had rare capabilities.

“As a matter of fact, I have erected a monument more lasting than bronze and taller than the regal peak of pyramids. I shall never completely die. Chamisa is not the only (prominent) person who passed through my hands. Even presidential spokesperson George Charamba was one of them. I taught him at Makumbe Mission in Buhera.”

From 1991 to 1994, Chamisa had no best friend, but he used to keep company with former Zimbabwe Tourism Authority spokesperson Sugar Chagonda. They were not very close, however, but just associates in education.

According Chamisa’s former history teacher, Colpart Zvoushe, who used to have a very close teacher-pupil relationship with the presidential aspirant, described him as a humorous but serious person.

“I found my match in Nelson Chamisa… short in stature, humorous but serious. The boy knew the difference between being serious and being angry. When I started teaching him History, like a sponge he absorbed everything until I had nothing to offer! He had both talents for a fine young scholar: natural intelligence, inquisitive mind, discipline and confidence,” Zvoushe said.

“Nelson was competitive by nature. Maybe it was his short stature that pushed him to dominate in other areas! Second best was simply not part of his academic itinerary. I remember the young man once stole a competitor’s script and we had to go over it and his word for word since he was not happy with his mark vis-a-vis the other learner’s mark. I won on that one.”

Zvouse recalled that Chamisa was also generous with his acquired knowledge.

“By the time he was in Form 4, I was now allowing him to teach my Form 3 pupils. He staged a coup there! My pupils ended up appreciating him more than me. What with the eloquence, alacrity and the mischievous smile,” Zvoushe said.
Zvoushe described Chamisa as wise beyond his age and said he had the “consummate skill of talking” and was in a class of his own when it came to choice of words.

“Teachers realised this talent and dumped the assembly duties on his lap. He took the role with aplomb and fellow students enjoyed one of their own doing that week-after-week,” he said.

The former teacher said Chamisa’s greatest strength was his “social propensity” as he could relate to anyone in the school.

“He had a joke ready for anyone. The boy had strong Christian convictions, which helped him stay away from the usual teenage maladies like drinking and smoking,” Zvoushe said.

“As I read about my protégé’s exploits every day from my base (Mpumalanga province, South Africa), I am not surprised at all. It is something that I and those who know young Nelson have been waiting for. And if the boy hasn’t changed, I can bet my bottom dollar that he will see this new challenge to the end.”

Chamisa was also a senior prefect and popularly nicknamed Mhepo, a moniker given to him for being a loose canon.
Those who grew up with him said he had an amazing propensity for work. During his student days at Alheit High School, he often remained at school during holidays, working in the garden and orchard while doing other mundane chores.
He used his labour to pay for his school fees.

One of Chamisa’s former classmates, who refused to be named, described the rising politician as intelligent and vocal from their school days in the early 1990s.

“From the beginning, Nelson was an orator who appealed more to other pupils and some teachers’ feelings rather than their understanding. He was actually very intelligent, reserved and particular about his work, especially when he became a senior prefect,” he said.

“One other thing that I saw in him was strictness. I remember how he used to have running battles with some stubborn juniors who had bigger frames than him. Nelson liked to be respected.”

Chamisa currently stands on the cusp of destiny, with just today from possibly becoming Zimbabwe’s next President.

Newer Post
Everything you need to know about Zim’s election
Older Post
Mugabe’s Gone, But Zimbabwe Still Has A Serious Cash Shortage