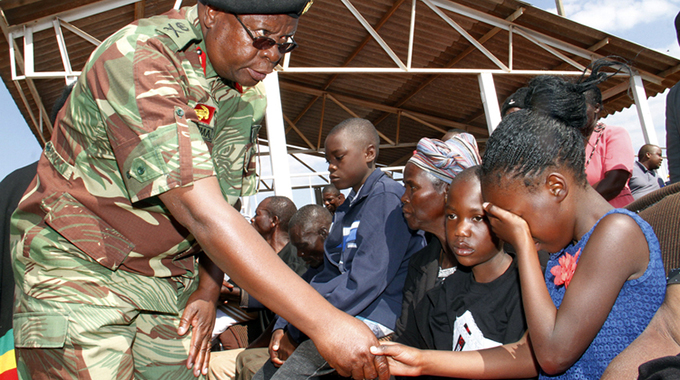 Fidelis Munyoro Senior Reporter
A funeral parade for Colour Sergeant Stanley Mugunzva, who died from injuries sustained following an explosion at White City Stadium in Bulawayo on Saturday, was held yesterday at the 2 Presidential Guard Infantry Battalion in Harare.

CSgt Mugunzva died on Sunday at Mpilo Hospital from the injuries he sustained at a zanu-pf rally addressed by President Mnangagwa.

He was 39, and will be buried in Chirumanzu at Ngavi Village under Chief Mapiravana.
One other person died, while 40 others were injured in the attack that was targeted at the top table.

Speaking during the parade, Commanding Officer 1 Presidential Guard Infantry Battalion, Lieutenant-Colonel Samson Murombo warned mischief makers seeking to derail the gains of Operation Restore Legacy by perpetrating acts of violence and terrorism that they would not succeed.

“The ZDF and Presidential Guard Brigade in particular will not be deterred by such acts of terror and we shall continue to execute our duties of protecting the Presidium and in particular the Commander-in-Chief of the Zimbabwe Defence Forces, Cde ED Mnangagwa,” he said.

Lt-Col Murombo said the country was born out of the sacrifice of many gallant sons and daughters who perished in the protracted war of liberation struggle.

“As such, we will continue to defend and uphold its Constitution with our blood if threatened by our detractors,” he said.
Lt-Col Murombo described CSgt Mugunzva as a gallant son and fighter who was an icon in the brigade.

“On behalf of Commander Zimbabwe Defence Forces, Commander Zimbabwe National Army, officers and Presidential Guard family and on my own behalf, I would like to convey our deepest sympathy to the Mugunzva family for the untimely death of our cheerful and hardworking dear comrade,” he said.

A family spokesman, Mr Simon Mugunzva, described his late brother as a pillar of strength and unifier in the family, who will be sorely missed.

“He was a visionary and humble measured young man with a bright future,” said Mr Mugunzva. “He was committed to his family and everyone looked up to him even in difficult times.

“He just loved everybody in the family and would do his best to assist those in need. The void he has left is difficult to fill. We will miss him.”

zanu-pf Harare provincial chairman Cde Godwills Masimirembwa also paid condolences to the Mugunzva family.
He said the incident at White City Stadium was a terrorist act and a threat to national security.

“This is obviously a tragic event to the nation and the family and our sincere condolences to the wife and relatives of the departed hero,” said Cde Masimirembwa.

CSgt Mugunzva was born on September 11 1979 at Gwangwava village in Chirumanzu, Midlands Province.
He did his primary education at Magada and George primary schools and completed his secondary education at Drake Secondary School in Kwekwe.

CSgt Mugunzva was attested into the ZNA on March 1 2000.
CSgt Mugunzva is survived by his wife Prisca and four children.