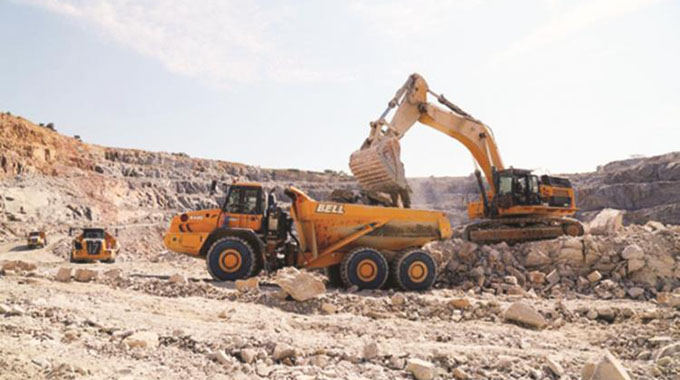 Zimbabwe is renowned globally for its platinum resources, diamond and gold deposits, chrome and other such minerals that have potential to transform this country into the Switzerland of Africa

Victoria Ruzvidzo In Focus
The mining sector has over the last few years emerged as one of the strongest pillars on which economic recovery will lean and in this regard we commend efforts by Government to facilitate resumption to full production by big mining firms as enunciated by President Mnangagwa early this week.

Zimbabwe boasts at least 40 minerals, with the Great Dyke being home to some of the richest mineral deposits on the continent.

This country is renowned globally for its platinum resources, diamond and gold deposits, chrome and other such minerals that have potential to transform this country into the Switzerland of Africa but efficient mineral exploitation has been compromised by inadequate capital, machinery and the export of unprocessed raw minerals instead of the finished product.

But President Mnangagwa said Government is determined to resuscitate closed mines while ensuring that those stuttering along are brought back to full life.

The mining sector contributes at least 13 percent to Gross Domestic Product but could do more once the sector starts operating at full throttle.

Statistics reveal that the country has 800 mines with a capacity to earn at least US$18 billion per year but presently these are achieving just $2 billion. This illustrates the potential in the sector and the amount of work required to realise the sector’s full capacity.

This is certainly not a low-hanging fruit but quite some effort is required for the sector to get to full production. The fact that Government is now making deliberate efforts to resuscitate the sector is commendable.

“We have over 40 different minerals in the country, including diamonds, gold, platinum, chrome, copper, nickel, iron ore and lithium. The country has rich coal deposits and many other minerals,” Mines Minister Winston Chitando told an international mining conference a few months ago as he sought to expose Zimbabwe’s wealth and potential as an investor.

He stressed that research had shown that six out of 10 of the world’s most valuable minerals – a massive resource base that investors in exploration, mining and beneficiation could take advantage of.

The above statistics do not need much explanation. It means the sector can fund Zimbabwe’s annual budget four times over, every year. This means such projects as infrastructure development, education, health and other social services can be funded by the mining sector alone.

This sector is said to have potential to attract at least $10 billion in investment by 2023. This year the mining sector is expected to earn $2,5 billion from $2,3 billion last year.

It is, therefore, not difficult to discern the desire by President Mnangagwa and his Government to resuscitate mines while strengthening the performance of those already in operation.

Indeed, agriculture has been Zimbabwe’s economic mainstay but mining has the potential to overtake this sector and ensure the economy sits on more solid and sustainable ground.

The interest registered in a mining indaba held a few months ago and attended by more than 450 investors from 20 countries was reflective of the potential resident in the sector. Harnessing this should make a world of difference to the sector, hence the economy.

The country has already made its intentions clear that it seeks to be one of the safest and most attractive mining investment destinations on the continent. More investment will give Zimbabwe a comparative advantage over most nations yearning for investment. This country’s return on investment (ROI) would obviously be higher once all systems are in place.

Therefore, it is only logical that more effort be directed towards developing this sector, of course parallel to other initiatives to grow the economy.

Big mining firms have also moaned of high royalties, obsolete machinery, high costs of borrowing and a generally illiquid market as major factors impeding the growth of the sector.

Hence a deliberate and more holistic approach by the Government is certainly bound to yield results.

The President is not only searching for the betterment of Zimbabwe today but for tomorrow. Mining deposits can sustain economies for centuries hence proper decisions made today will impact future generations.

We can never overemphasise the importance to invest in value addition in this sector. Most minerals can fetch higher prices if beneficiated, for instance, a raw diamond fetches far less than a polished one.

To ensure that President Mnangagwa’s vision becomes a reality in terms of bettering Zimbabwe, it may thus not be such a bad idea to invest in gold mills and ore separating companies, diamond polishing and platinum refineries to raise value, therefore, better terms of trade.

The global market is ruthless and requires countries that are forward looking and make the most of what they have, their comparative advantage.

Africa has suffered for centuries from a system where it sells its minerals for a song, but then buys the same as wedding rings and other jewellery at expensive prices thus exporting jobs and losing out on huge amounts of revenue and skills development.

Such scenarios need to belong to the past. Globalisation has brought with it a better appreciation of international trade and survival tactics that Zimbabwe and its peers need to latch on.

Small-scale miners will not be left out in the new matrix that the Government is working on. It would be lethal to ignore a sector that contributed 53 percent of Zimbabwe’s gold output last year.

Such vices as smuggling, under- invoicing and other illicit behaviour will need to be monitored closely so that efforts by Government and other players are not in vain.

The mining sector is a giant that is reawakening. It needs to anchor the growth path that this country has taken over the past few months.

This is obviously not to the exclusion of other sectors but all should be done in tandem.