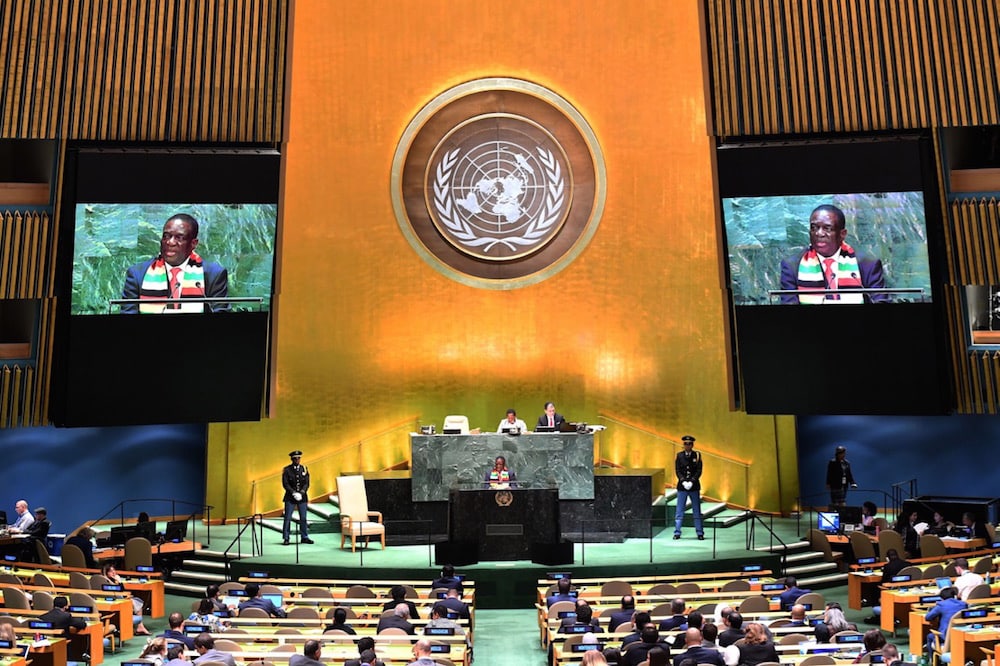 President of Zimbabwe Emmerson Dambudzo Mnangagwa speaks at the 74th Session of the General Assembly at the United Nations headquarters, in New York, 25 September 2019 in New York, JOHANNES EISELE/AFP via Getty Images

In submissions to the Universal Periodic Review process, the Zimbabwe chapter of the Media Institute of Southern Africa notes improvements in the legislative environment, but condemns clawback provisions in proposed new laws.

This statement was originally published on misa.org on 22 July 2021.

MISA Zimbabwe has made two submissions to the third cycle of the Universal Periodic Review (UPR) on Zimbabwe, where it noted improvements in the legislative environment, but decried clawback provisions in proposed new laws that have the effect of infringing on freedom of expression.

The UPR is a unique process that involves a review of the human rights records of all UN Member States.

The UPR is a State-driven process, under the auspices of the Human Rights Council, which provides the opportunity for each State to declare what actions they have taken to improve the human rights situations in their countries and to fulfil their human rights obligations.

In the first submission, MISA Zimbabwe collaborated with the umbrella Media Alliance of Zimbabwe (MAZ), where the two organisations noted that as per the UPR second cycle recommendations, the government was forging ahead with the repeal of the Access to Information and Protection of Privacy Act (AIPPA).

In July 2020, the government promulgated the Freedom of Information Act, which is “seen as a positive step”, however, the government is yet to put in place mechanisms that operationalise the law.

“For example, the law compels government bodies to have designated personnel to deal with information requests and produce reports thereof, something that is yet to be put in practice,” reads the MISA and MAZ submission.

“The accountability mechanisms in instances where one would have been denied information remain weak, with some cases that have been brought before the Zimbabwe Media Commission (ZMC) yet to be finalised.”

MISA and MAZ were also concerned that laws such as the proposed Cybersecurity and Data Protection Bill had the effect of reversing the gains brought by the Freedom of Information Act.

The Cybersecurity and Data Protection Bill criminalises the publishing of falsehoods, which the Constitutional Court had already declared unconstitutional.

It also imposes surveillance on citizens and this has the potential to infringe on freedom of expression, association and of the media.

MISA and MAZ also raised concern with attacks on journalists, which was particularly high in 2020 at the onset of the COVID-19 pandemic.

The two media rights advocacy groups pointed out that there is a noticeable sustained culture of violations against journalists and media workers in Zimbabwe.

“Journalists are subjected to all forms of violence, including verbal threats, harassment, physical abuse, unlawful detentions and arrests,” reads the submission.

“These cases escalate when there are high stakes political contests in the country.  In 2020, MISA Zimbabwe recorded 52 cases of violations of journalistic and media freedoms.  All these crimes against journalists are committed with impunity.”

Among the recommendations, MISA and MAZ urged the government to commit to the principle of co-regulation of the media.

“The enactment of a Media Practitioners Bill will give effect to the co-regulation of the media, as obtained in the draft framework submitted by MAZ and MISA and submitted to the Parliament of Zimbabwe,” implored the two organisations.

Further, they recommended that the government should provide a clear timeline on when emergency laws that were promulgated in the aftermath of the COVID-19 outbreak would be repealed as they have the effect of infringing on freedom of expression.

MISA and MAZ urged the Zimbabwean government to recant the SADC resolution on taking pre-emptive measures against the so-called abuse of social media and ensure that it is not a party to resolutions that have the effect of infringing on freedom of expression and of the media.

In the second submission, which centred mainly on digital rights, MISA collaborated with the Small Media and Collaboration on International ICT Policy for East and Southern Africa (CIPESA).

The submission recommended that the government should uphold the right to privacy by enacting a data protection and privacy law in consultation with stakeholders, and, to amend provisions of the Interception of Communications Act, to provide for judicial oversight on lawful surveillance.

The organisations further recommended that the government should end the practice of internet shutdowns and ensure that restrictions on internet access, online expression, assembly and association are consistent with international and regional human rights standards.

To ensure access to the internet, the organisations recommended that the authorities put in place measures to reduce costs of internet access including the deployment of the Universal Access Fund for increased affordability and digital inclusion of marginalised groups including women, rural communities and persons with disabilities.